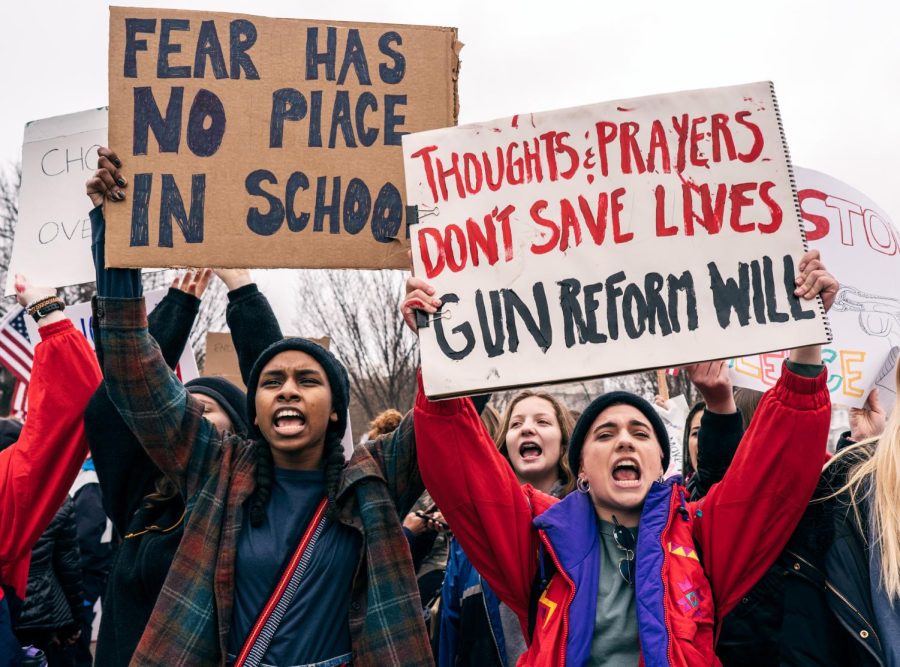 Signs from a demonstration organized by Teens For Gun Reform in the wake of the February 14, 2018 shooting at Marjory Stoneman Douglas High school in Parkland, Florida. Image via. Wikimedia Commons

According to the Gun Violence Archive, there have been over 233 mass shootings this year across the United States. We are 154 days through the year, and the number of mass shootings is nearly double that.

“We all know the playbook by now. We all know how it unfolds. The grief, the announcement, the outrage. Some semblance of public debate. And then generally no action. And that has been the pattern, really, for at least two decades, going back to Columbine,” added Chan.

Former longtime executive editor of The Seattle Times who now runs Temple University’s journalism school, David Boardman posted a tweet on May 24th which read, “Couldn’t have imagined saying this years ago, but its time – with the permission of a surviving parent – to show what a slaughtered 7-year-old looks like. Maybe only then will we find the courage for more than thoughts and prayers.”

Nancy Barnes, NPR’s head of news replied to the tweet saying, “I am with you. We cannot sanitize these killings. That in and of itself is an editorial decision.”

This conversation initially from social media has also made its way onto news channels with CNN’s Jake Tapper starting the conversation on his show on Wednesday. “You know, there are images of these shootings that law enforcement and, frankly, we in the news media, that we don’t share with you. Because they’re so horrific,” the anchor said. “But maybe we should. Maybe the shock to the system would prompt our leaders to figure out how to make sure society can stop using these troubled men – and it’s almost always men – from obtaining these weapons used to slaughter our children.”

His response to the conversation is what many consider to be the truth. The reason for these shootings is not entirely the people. The problem is the weapons. The guns that are being so freely sold with incredibly little to no resistance in the way.

Every time a major shooting, like the one in Uvalde, Texas, occurs, the whole country begins to talk, sharing their condolences, and expressing how horrible they believe the situation is. Although they do nothing to help prevent the number of school shootings. At the end of the day the weapons are still sold, and no changes are made.

In Florida, Democratic lawmakers are looking to expand the state’s “red flag” law. The law allows the court to confiscate firearms from people who seem suspicious or at risk of harming others or themselves.

And in Canada, new legislation has been introduced to freeze imports and purchases of handguns.

“We are capping the number of handguns in this country. It will be illegal to buy, sell, transfer or import handguns anywhere in Canada,” said Canadian Prime Minister Justin Trudeau.

The gun laws have been in mind for a long time, but the introduction of the new measure comes after the mass shootings in our country this month.

Bill Blair, minister of emergency preparedness, said Canada is incredibly different from the US.

“In Canada, gun ownership is a privilege not a right. This is a principal that differentiates ourselves from many other countries in the world, notably our colleagues and friends to the south. In Canada, guns are only intended to be used for hunting and sport purposes.” Blair said.

In the wake of the devastating school shooting in Texas, President Joe Biden has also been pressing on potential avenues for gun control.

“It makes no sense to be able to purchase something that can fire up to 300 rounds,” he told reporters outside of the White House. “The idea of these high-caliber weapons – there’s simply no rational basis for it in terms of, about self-protection, hunting and I guess – and, remember, the Constitution, the Second Amendment was never absolute. You couldn’t buy a cannon when the Second Amendment was passed. You couldn’t go out and purchase a lot of weaponry.”

President Biden also recently visited the families of Uvalde victims and told reporters he would not give up on pushing to achieve what he referred to as “common-sense” gun legislation.

“The folks who were victimized, their families, they spent three hours and 40 minutes with me. They waited all that time. Some came two hours early,” Biden told the reporters. “The pain is palpable. I think a lot of it is unnecessary. I’m going to continue to push.”

Democrats are also working to push legislation that would dramatically change gun ownership in the United States, although many Americans are skeptical of their intentions as the bill features points such as raising the firearm purchase age to 21, implementing a ‘universal background check’, and banning homemade guns, which some Americans have a problem with as reflected in an Opinion article on Newsweek.

Regardless of how it is done, some form of action is necessary to keep our country and our children safe.

Regarding officers’ response to the shooting in Texas, State Sen. Roland Gutierrez, a Democratic representative of Uvalde said how, “There were clear, clear violations of protocol here. I want to make sure that we have access to all of the evidence as quickly as possible so we can get a thorough investigation. It’s not going to bring these kids back, of course, but we need to make sure that we get the answers so that this never happens again.”

“We have children murdered as though they are at battle,” said Rep. Sheila Jackson Lee after noting the observation of Memorial Day. “And that is not fitting for this nation.”