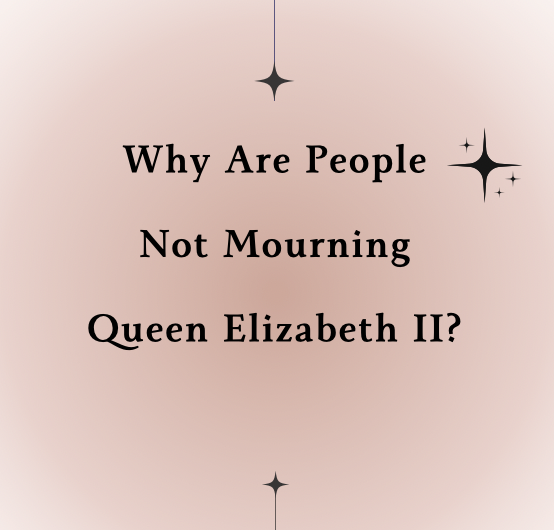 People have had mixed reactions to the Queen's passing. Graphic by C. Ford.

Queen Elizabeth II, the UK’s longest reigning monarch in history, passed on September 8, 2022, at the age of 96. While millions of people have outwardly mourned her death, many have celebrated, which brings us to ask, “Why are people not mourning the death of Queen Elizabeth II?”

Her Majesty’s rule spanned over 7 decades, encompassing events such as the Vietnam War, the Good Friday Agreement, Chornobyl, the Fall of the Berlin Wall, and the COVID-19 Pandemic. She oversaw the appointing of 15 Prime Ministers and met 13 out of the 14 Presidents elected during her reign. Though the queen is only a figurehead and does not make government decisions, she never acknowledged the harm the British Empire had inflicted on millions of people. Perhaps the most scorned of them all is the previously imperialized African countries, many of whom did not gain independence until the mid to late 20th century. Violent interventions, such as the Mau Mau Conflict in Kenya, which lasted from 1952 to 1963, have occurred throughout the period of British imperialism. Millions of people have lived with irreversible trauma and little to no compensation.

The death of Queen Elizabeth II warranted abolishing the British monarchy, which has been in place since the 10th century. When asked about this, senior Greta Wolfe said, “I think that they should get rid of it; the monarchy is inconsistent and the cause of many global issues, most of which are associated with British colonialism or involvement.”

When asked about her opinion on Queen Elizabeth II’s lack of acknowledgment of British colonialism, student Sasha Lopez Alvarenga said, “Honestly, I feel like if she did acknowledge the colonialism, it might have impacted her legacy, but at the end of the day, who’s at fault, it’s her and her family.”