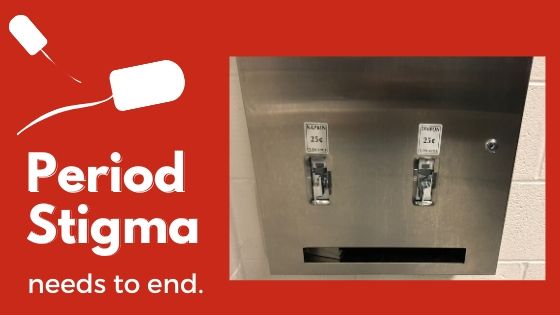 Image created by A. Guo

Biology should not be something girls are made to feel ashamed.

As you read the title or viewed the photograph for this article, you may have felt embarrassed or awkward. When taking out your pad or tampon, you may feel the need to put it in your bag or hide it in your pocket. This is menstruation stigma, and it needs to stop.

So what is menstruation in the first place?

Menstruation, commonly referred to as a period, is when blood is released from a uterus. A girl usually starts getting her period around the ages of 10-15 and it typically lasts between two to seven days. Menstruation will occur irregularly when a girl first gets her period, but will usually occur around once every four weeks. Before or during the period, girls may also get PMS or premenstrual syndrome which causes emotional and physical symptoms (i.e. sadness, anxiety, acne, bloating).

Many of those who experience menstruation also experience cramps. Aishwarya Apte, Green Level Freshman, says, “It’s weird because cramps can be really painful sometimes but it’s weird to acknowledge them in front of a big group of people. They can really hurt and you just have to keep it in and go through the day.”  Otherwise, you may have to go home to hide it. In fact, period pain is actually the leading cause of absences for girls in the United States.

The problem is that periods have come to be considered culturally taboo. This taboos tell girls or anyone who experiences periods that menstruation is something to hide or be ashamed about. Apte tells us, “I definitely am embarrassed about it because that’s what we’re taught. We’re taught to be silent about it and that makes most girls be shy about it. In 5th grade, the girls were separated from the boys and were taught about periods while the guys learned about other facts, but after that, it wasn’t really normal to talk about on a daily basis.”

This leads to girls thinking periods are something to be quiet about, while boys don’t know what periods are about until middle school or high school. Jake Juliano, Green Level Sophomore, says, “I am sure that many of my peers at school, especially boys, would find [seeing a tampon or pad] embarrassing since they don’t fully understand the process or feel comfortable with the idea of what a period is and being associated with that.”

“Having a period is a part of life that every girl goes through,” Apte says, undeniably correctly. Menstruation is experienced by half of the world’s population, girls get their period every month, women run and give life to the world, period stigma has to stop. Period.