All Male Chorus Blows The Audience Away 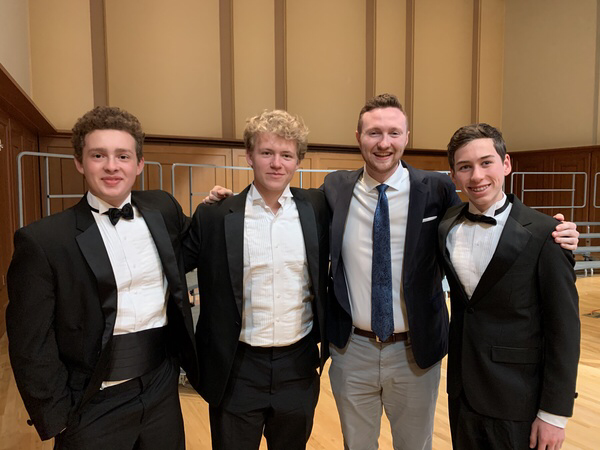 Last Friday, the boys in the Green Level’s chorus program went with Mr. Olson to the All-Carolina Male Chorus Festival. This festival was created so that high school aged male singers could interact with and learn from older singers. In many high schools, male singers are few and far between. This festival is used as an encouragement that anyone can make a beautiful sound with their voice.

The festival lasted two days, Friday and Saturday, and ended with a concert where the young boys would show what they learned from this experience. Gabe Chapman, a Freshman at Green Level, was one of the boys that participated in the festival. Chapman said, “[During the two days] We were with Mr. Olson’s college chorus professor from Kentucky to prepare for the performance.” During the prep for the concert the boy were required to learn 5 songs that they would be performing during the Saturday performance. Mr. Olson, the chorus teacher here at Green Level who brought the boys to the festival, said, “I think that [the festival] was extremely successful. It was cool to see singers who hadn’t sung at an honor choir level sing and be able to have that experience.”

The All-Carolina Male Chorus Festival was a very educational and helpful way of learning for many people. Chapman said, “I learned that doing solfege helps you learn music faster because if you know the notes you already know half the piece. The festival impacted me because it made me more confident about my voice.” Even Mr. Olson was able to learn some things! Mr. Olson said, “I still learn from my college professor every time I watch him teach. I like that I can sit back and watch him take the reins and teach for a couple days. Watching him direct the choir and lead them to an amazing concert, it helped me pick up a lot of new things that I can use in my own classroom.”