Is it Okay for Men and Boys to Comment on Girls in the Street? 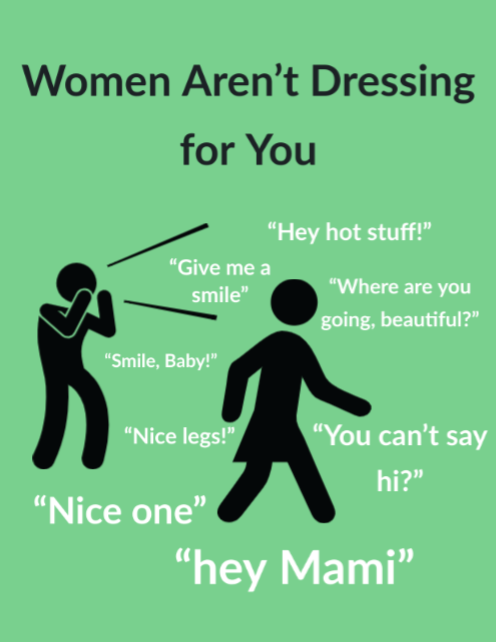 Graphic Made by A. Rudolph

“My sister and I were on the Santa Monica pier in California, and these guys that were about a year or two older than us were there too. We had just gone surfing so we were in wetsuits. When we walked by one of them said, ‘Wow, I’d surf all over their bodies.’ We kept walking and just ignored them, but the whole experience made me feel very uncomfortable.” This is a real-life story from an anonymous freshman at Green Level who was willing to tell her story of street harassment. Stories like these aren’t uncommon around the world to women and girls of all ages. Women have simply learned to keep walking and ignore the comments on their bodies. But just because they chose not to make a scene in the moment by overlooking these remarks made about their bodies does not mean that this matter should not be addressed.

According to Stop Street Harassment, “Gender-based street harassment is unwanted comments, gestures, and actions forced on a stranger in a public place without their consent and are directed at them because of their actual or perceived sex, gender, gender expression, or sexual orientation.” Street harassment is not just limited to gender-based comments and actions, but can also be linked to racism, ableism, classism, and discrimination towards religion. In our own student’s story above, we can see that she was subject to gender-based street harassment by the boys on the pier. Women around the world can all say that they are familiar with the unwanted comments, whistling, and sexual names like “sexy” and “baby” from strangers that they receive while doing simple tasks like walking going to the grocery store. In our modern world today, especially in America, where we pride ourselves on our persistence for equal rights for women, why is it that women can’t feel safe while walking to work because of their outfit?

Countless girls at Green Level have encountered street harassment. Ella Park, a freshman here at GL, said that when she was catcalled the first time, “It took me aback because it is something that is extremely rude and out of place. I wasn’t expecting such a forward comment from someone I don’t know.” Men are being allowed to have the right to comment on our bodies whenever they feel like it, and this is something that is blatantly wrong. Park also stated, “[the comments] are objectifying women and young girls in a way that makes them seem worthless beyond their appearance.” Women are valuable on the inside just as much as they are on the out, and should be treated like they are important and not just something to look at.

Some men hear our arguments and say, “But I’m only trying to compliment them.” Let me be clear, some men make comments and are genuinely just being nice and considerate. But their remarks are different than those of “Nice butt” and “Hey, is that for me?.” Comments like these don’t make women feel good for the day, but rather make them feel worthless and like they only have meaning in how their body looks.

I want to make something clear: not all men are trying to hurt and lower women. But, this is still a big issue at hand that we need to deal with. Boys, and girls, should be taught that this is wrong, and we need to put a stop to this. My one reminder: Women aren’t waking up and dressing for you in the morning. They are humans, just like men, and have families, and social lives and all the things you do. How would you feel if you saw someone treat your mother, sister, or daughter like this? Join us in ending the injustice of street harassment.