Should Video Games be Considered A Sport 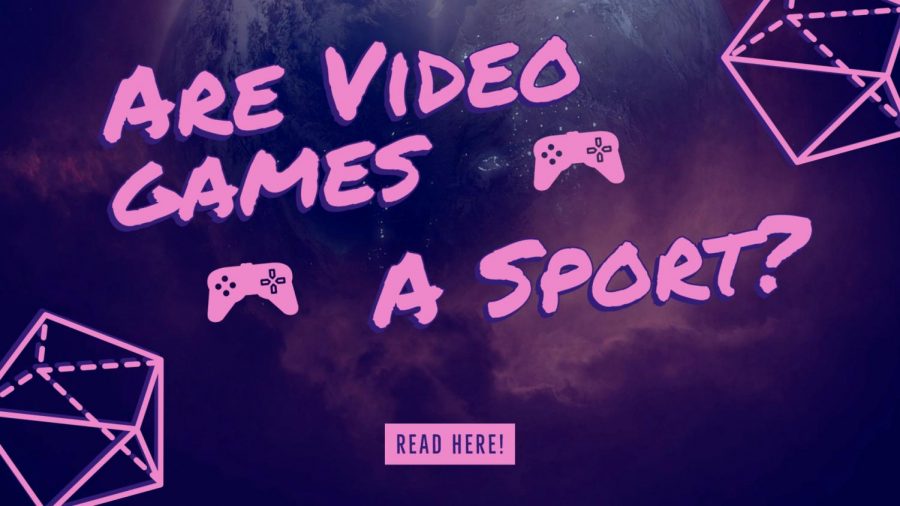 Graphic made by T. Rangaraju

As the popularity of video games continues to grow, more people are starting to consider this form of gaming as a sport. After all, it does require a high level of skill and concentration which is a big part of sports. In 2018, ESPN’s sports magazine featured a famous video gamer, known as Ninja, on the cover. Across the colorful purple cover, we can see Ninja looking optimistically into the distance while the words “The Legend of Ninja: Biggest Gamer in the World” were written across the side. This caused a huge controversy in the athletic world. Even though some people believe this activity is a sport, we don’t fully agree.

For example, video games don’t require physical activity like sports in the real world. According to dictionary.com, “an athletic activity requiring skill or physical prowess and often of a competitive nature, such as racing, baseball, tennis, golf, bowling, wrestling, boxing, hunting, fishing, etc.” Though video games do require lots of skill and quick reflexes in the fingers, professional video gaming does not require the physicality of sports. Being able to quickly move your thumbs does not make you an athlete.

Real sports like swimming and football help people get exercise and stay healthy, unlike video games. People often sit for many hours playing video games, and it doesn’t really require much physical activity. Playing video games for a very long time can even cause issues such as eye-discomfort, blurry vision, and headaches. Shaheer Lodhi, a freshman here at Green Level, said, “Video games are not a sport because your body is not benefiting from it in any way. If anything you are losing your eyesight from.” In sports, the athletes have to train for hours, but all of their hard work pays off and helps them gain muscle and become more capable athletes. Even though professional gamers do train for hours similar to athletes, these gamers are not benefiting their bodies from their excessive.

Some may say that video games should be considered a sport because most video games do include the competitiveness that can be found in sports. It is true that video gaming does require plenty of skill and capability, but the physical aspect of a sport is where this form of gaming falls short. The competition in video games is probably what makes them almost like a sport. However, the lack of physical activity in gaming excludes video games from the athletic community. Mr. Rogers, a math teacher here at Green Level told us, “I think because in many video games you have leaderboards and you see the competitiveness and dominance. However, sports have more of a physical aspect.

Video games do not require physical activity, and though professional gamers do practice their gaming for many hours of the day, athletes are physically training and growing their muscles for the game throughout the week.

Real sports take place in the real world and video games take place in a digital, made-up world. Video games are not as active, and they aren’t healthy which defeats the whole purpose of sports in the first place. That’s why we believe video games are not a sport. The virtual world of video games will never exist like events and competitions that happen in the real world. Video gaming is a skill that is hard to develop, and we do have respect for you gamers. However, gaming should not be held as equal to something like football or baseball.