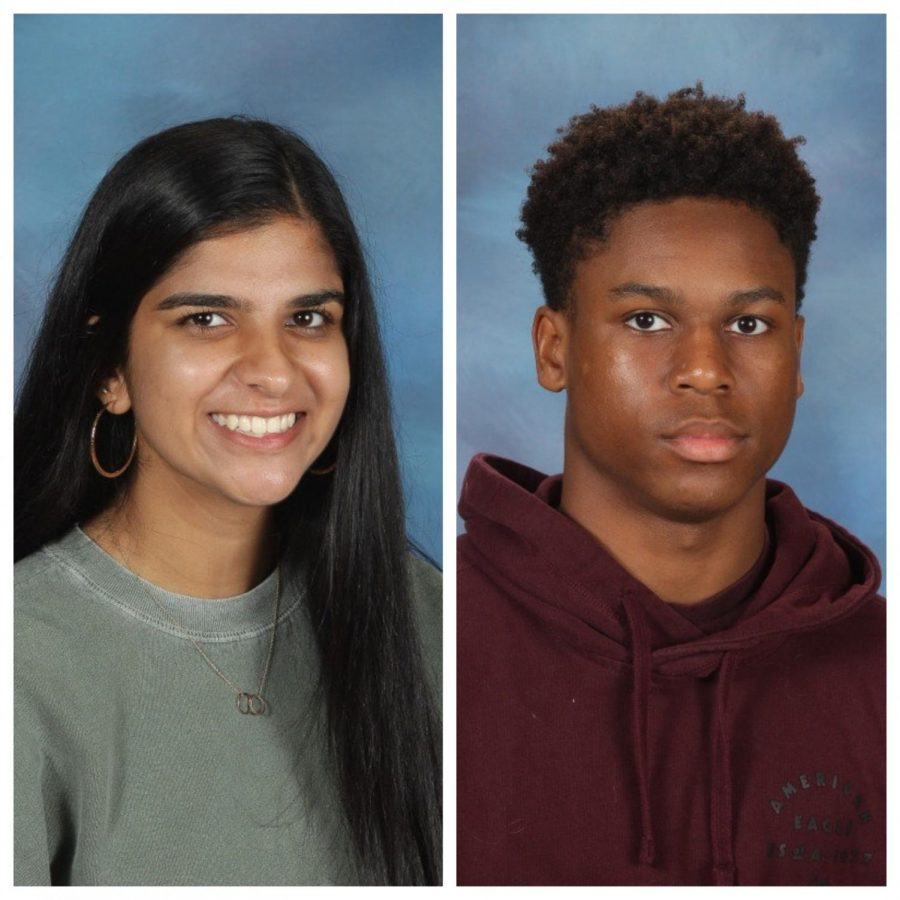 Diya Ramchandani and Cameron Chatmon are the inaugural Green Level Athletes of the Year.

Gator athletes had to show their toughness this year, since many of our freshmen and sophomores were competing against more seasoned upper-classmen. Our first year of competition was a great one, with lots of highlights. To make it happen, students had to step up into leadership positions to help their teams succeed, and two such students are our first Green Level Athletes of the Year: Diya Ramchandani and Cameron Chatmon.

Ramchandani was nominated by classmates and teachers, and after reviewing the nomination forms, our staff agreed that she was the perfect person to win this title for the first time.

One classmate told us that “Not only was [Diya] the first Captain for the women’s tennis team, but she also brought her team first despite it being their first year. She also volunteers with tennis and has worked really hard to get to where she is now.” Lizzy Novelli, Diya’s co-Captain of the tennis team, thinks that “Diya is the perfect fit” for this honor, adding that Diya is “an amazing friend and teammate who’s involved with her community and seeks out ways to help others whenever she can. She is a strong and resilient team player who always gives 100% at everything she does. I am so proud of her and I know she will achieve so many things throughout her lifetime!”

Diya excels not only as an athlete, but as a student. Spanish teacher Roger Collins told us that she is a “great kid” who is “very engaged and focused as a student and a learner,” adding that Diya’s focus and dedication remained constant even during our period of remote learning.

Diya’s teachers, classmates, and teammates also recognized her strong character and commitment to service.  One example is her work getting the Women’s Tennis Team involved in volunteering for Abilities Tennis.

When we reviewed the nominations and feedback we received on Green Level’s student athletes, one name definitely stood out: Cameron Chatmon.

Miles Brathwaite told us that he thinks “Cam deserves to be Athlete of the Year because of all the hard work and passion he has put into the sport he loves. You can see that when he performs on the field.” Tyler Coffee added that Cameron “has gone through a bunch of adversity but every time he stepped on the field he gave it his all. He is a man of character. He was willing to put in the extra effort to see not only the team win but the school.” Cicero Leak told us that Cameron has “good skills and talent,” and Mark Hines agrees that “he does well on and off the field. He can also be a leader too. Beast at football.”

Teacher and Head Football Coach Ben Godeau spoke very highly of Cameron, who is a Captain of the team and a member of the team leadership council. He told us that Cameron “immediately stepped in as a leader in our new program and has been an integral part of establishing our culture.  Not only does Cameron excel on the field, but he’s a well-rounded individual who shines in the classroom.” Coach Godeau says that the coaching team is “looking forward to Cameron’s continued leadership on the football team, in the school, and in the community.”

Not only does Cameron excel at football, he is also involved in track! Classmate Kayleen Ahlquist says that “He was a very important teammate and was very crucial in all of football’s wins. He also attended the football workouts after the season and is now a leader in spring track.”

Both Diya and Cameron Chatmon have so much passion for their sports and both helped lead their teams to victories this year. Even more importantly, both have shown character, dedication, and community leadership as well. Congratulations, Diya and Cameron! We’re proud of you both.