Green Level Artists of the Year 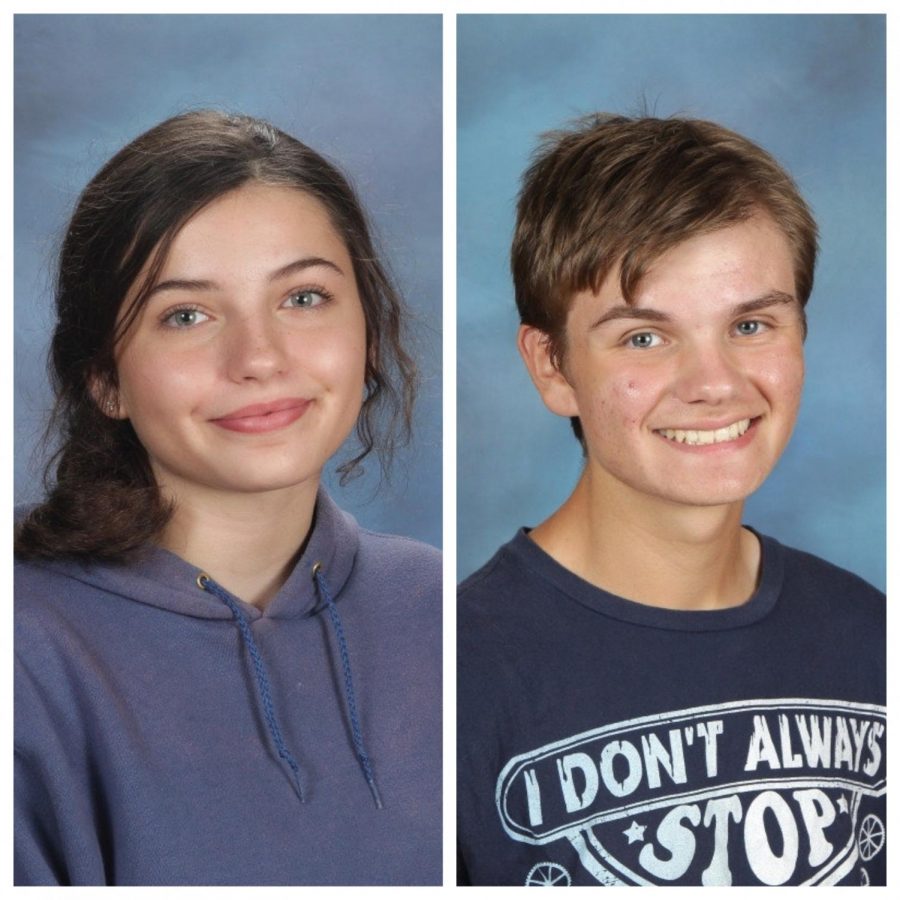 Regan Henderson and Jake Juliano--Green Level Artists of the Year.

Green Level Chorus teacher Steven Olson puts it best: a Green Level Artist of the Year should be “a leader among their peers, [showing] consistent dedication to their art form, always striving to improve and never settling, having the ability to receive constructive criticism and handle it as a professional, build others up, always willing to work hard.” Based on nominations from teachers as well as students, The Gator’s Eye has selected two students as our Artists of Year who show these qualities every day.

Regan Henderson and Jake Juliano are this year’s Green Level Artists of the Year.

Henderson is very involved in the Green Level Fine Arts Department, holding the leading role in this year’s school musical, creating as an art student, and singing as a chorus member. She has also participated in Gators Together, went to the All Carolina Choir at Wingate University, and won Choral March Madness this past school year.

According to Mr. Olson Henderson is “someone that is always striving to improve and does so daily. She is tenacious and passionate about every commitment she takes on.” He adds, “Regan embodies every characteristic of a fantastic artist, and even more–so, a fantastic person.”

Classmates like Alyson Springer agree with the decision. “Regan is such a talented singer, but she also is so passionate about performing. Her energy in the classroom and on stage is so contagious… you can totally tell that she loves what she’s doing, and just being around her makes every rehearsal more fun,” Springer says.

Juliano is another artist who has greatly contributed to the success of this year’s Fine Arts Department. This past year, he placed into All-State Band and participated in Symphonic Band, Marching Band, and Indoor Percussion. He also took part in Gators Together and is part of United Under Arts.

Mr. Myers, Green Level’s Band Director, says, “Jake has been one of the pioneers in the performing arts this year. He was one of the leaders and strongest performers in the band,” adding that Jake has “promoted art within our school and community.”

Classmates like Rhea Pimenta tell us that Jake “works really hard and is very committed to band.” One of Juliano’s bandmates, Arid Kabir, also has great things to say about him: “Jake Juliano is one the hardest workers and kindest people I’ve ever met. He’s such an amazing friend and role model. Constantly throughout my years in band, he’s always had a mindset to think of others before himself, and with him being our section leader, he helped not only me but our fellow clarinet players incredibly. Jake was always there to cheer me up if I was done, and he’s always so incredibly positive.”

The Gator’s Eye congratulates both Jake and Regan. You enrich our school community with your creativity, and your character, work ethic, and dedication make us all proud. We can’t wait to see where the next year takes you!