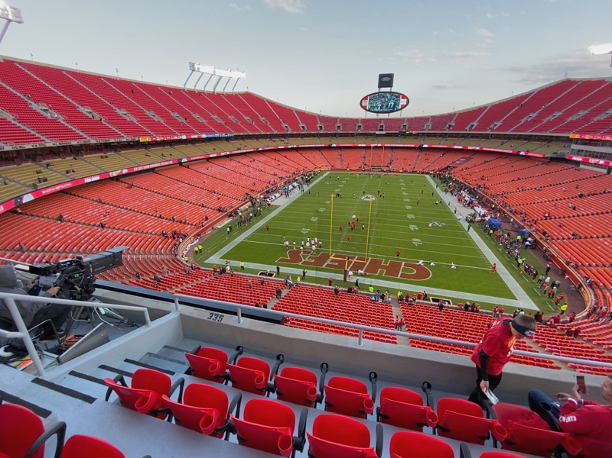 Opening day for the 2020 season was a very exciting day for the NFL. The first game of the 2020 season saw the Houston Texans travel to Kansas City to take on the Chiefs. Patrick Mahomes and Deshaun Watson, the two highest-paid quarterbacks in the NFL going head to head in a much-anticipated face-off. You could almost feel the excitement through the screen from the players and fans. There were only 15,895 fans in the stadium due to COVID-19, which is 22% of the maximum capacity, but at times sounded like 55,000 fans.

The whole game, starting with the pregame was mesmerizing. It was all about change and the fight for equality happening right now. They played not only the “National Anthem” but the song “Lift Every Voice” which is considered to be the black national anthem was played as well. All the players locked arms in unity while the songs were sung.

The Chiefs have lots of great, young, exciting players. One of whom being their young QB, Patrick Mahomes, who is considered one of the game’s most dynamic players. He was ranked No. 4 on this year’s top 100 NFL list. On top of their quarterback, they have arguably one of the best Tight Ends in the NFL this year, Travis Kelce, and one of the best Wide Receivers in the league, Tyreek Hill.

Although the Chiefs have a stacked lineup, the Texans have some very promising players for this season as well. Their QB, Deshaun Watson is one of the top quarterbacks in the league. He was even ranked the #5 best in the league. They also have one of the best defensive ends in the league, J.J. Watt who was ranked #12 in the top 100 NFL list.

The Chiefs won the coin toss and deferred, giving the Texans the ball. The first drive for the Chiefs ended in what looked like a touchdown but after an official review, was ruled incomplete. The first drive for both teams ended in a punt. Even with two of the best quarterbacks in the league, the first touchdown of the game and the season was a running play. David Johnson had the first touchdown of the 2020 season and had a great game. Johnson plays for the Texans and gave them an early lead.

Early in the second quarter, Mahomes found his rhythm with a textbook drive of 75 yards ending with a touchdown. By the end of the first half, two touchdowns had been taken away after an official review. Both touchdowns that got taken away were from the Chiefs. After a failed field goal attempt by the Texans, the Chiefs got the ball back to score a field goal making the score at halftime 17-7. The Chiefs were up by 10 with their super bowl MVP Mahomes carrying them to what seemed to be an easy victory.

Clyde Edwards-Helaire had an amazing game, with 138 rushing yards. Helaire is a rookie, but with the way he was playing you never would have been able to tell. Helaire is on the Chiefs and aided them greatly in their first game of the season.

The Chiefs picked up where they left off last year with a 34-20 win. The Texans were starting to make a comeback late in the game, but they could not pull it off in the end. Both teams played great games, but the Chiefs emerged victorious.