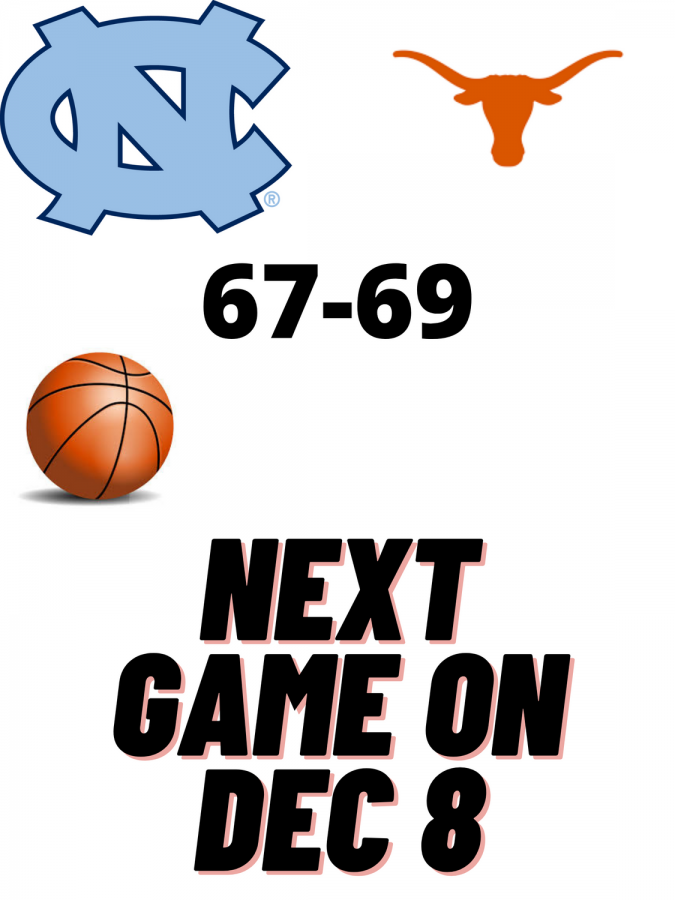 Graphic made by A. Kay

Results from the UNC vs. Texas basketball game.

This Wednesday, UNC and Texas played in Asheville, North Carolina at 4 pm. This year UNC has played three other games and they won all of them, but they were still very close games. This makes their record 3-0. Texas has also played and won three other games this year . This makes their record 3-0.  UNC’s basketball coach is Roy Williams, who has been coaching at UNC for 17 years now. The Texas head coach is Shaka Smart who has been coaching Texas for only 5 years as of now. Going into the game, experts predicted a close one knowing that both teams haven’t lost a game in the season yet and they both have very good players on the court.

UNC and Texas had a very close game indeed, but Texas won by 2 points. It came down to the last second. UNC had the lead most of the game, but when you look at the stats you can see why UNC lost. UNC had 14 turnovers while Texas only had 11 which isn’t that big of a difference, but those can add up fast. Another reason UNC lost the game was because of their 3 point shot. UNC was 11.1% on 3 point shots while Texas had 40.9%. If UNC had fixed that and gotten the percentage higher they could have easily won that game.

The final score of the game was 69-67 Texas, a very close game all the way to the end. Overall, I think UNC has some work to do because they are a very tall team. They need to be better at shooting, with the exception of the small shots here and there. UNC will play their next game on December 8th at 7:30pm against #3 ranked Iowa.