Snowshoes Are Used to Create Magnificent Artwork in Finland 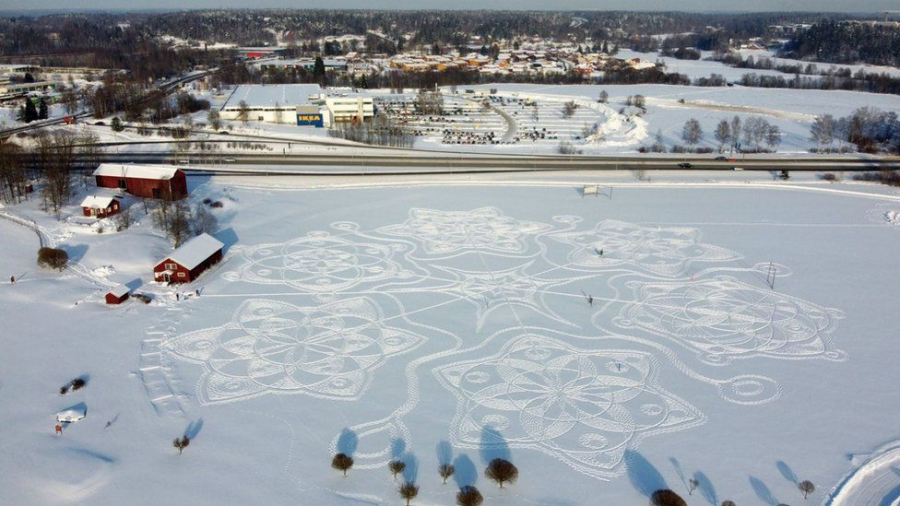 Jane Pyykkö and her volunteers created this snowy masterpiece.

In the southern Finland city Espoo, Janne Pyykkö worked with 11 volunteers to create this image in the snow. They did this using rope and snowshoes, stretching the design over 525 feet (160m).

The pattern of interlocking shapes was designed by Mr. Pyykkö on his computer at home. The drawing consisted of six large shapes in the snow-flake form – all slightly different – with a star centerpiece in the middle linking them.

For each volunteer to follow, Mr. Pyykkö printed detailed blueprints, guiding them to map his concept on the snow-covered Löfkulla golf course, near the capital, Helsinki. They used rope and wore snowshoes measuring 50cm long and 30cm wide to make the patterns. Mr. Pyykkö considered the project to be a “social challenge” since he had never assembled a group of volunteers before to create snow art.

According to volunteer Elena Ceccarelli, during the time it took for the artwork to come together, the group spent “three hours laughing together and walking”.

British snow artist Simon Beck is a “hero” to Pyykkö, and he wanted to bring his inspiration close to home.

It’s very easy to understand how this man can be such a huge inspiration for people of all ages, as he walks for hours in many different weather conditions just to create these magnificent designs. Beck uses a compass and measures how many steps he needs to take for each section of his artwork. He walks miles for this art, and sometimes just the right amount of snow and wind erases it swiftly. Yet, Beck just begins another time and keeps on working.

At the beginning of January, the 61-year-old traveled to Colorado to prepare ten giant murals over the course of two weeks, weather permitting. Best known for making enormous geometric snow patterns with his feet in the Alps, he said Colorado’s snow was different.

“It is very light due to the dry atmosphere in the interior of the continent, and it just blows about,” he said. “It doesn’t seem to stick down into a snowpack as it does in the Alps.”

This created a less than ideal environment for snow art, but Beck was able to create beautiful pieces regardless.