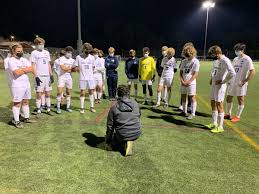 Coach Solakoglu gives a speech to the team.

Varsity soccer came to an end this week with the last game finishing against Jordan. Our varsity soccer team made great strides of progress this season, and are looking forward to being even better next season, which is a mere 4 months away.

I asked Coach Solakoglu (the varsity soccer coach) a few questions about the season that just came to an end, and the exciting new season starting in a few months. He had nothing but extremely positive things to say. When I asked him how this season went compared to last season he stated “Huge improvement!” Were his first two words. He stated that this season “We were not even focusing on scoring goals, we were focused on ordering equipment and putting a team together.” But now that that is done they finally got to buckle down and focus on scoring goals and getting wins. He then went on to preview next year stating, “Here in a few months… we will have a full deck for the first time. It was easy for us to think that we already did because of the talent that we have like yourself, and newer players coming up from the bottom.” As you can see he is very confident in both the Varsity and JV teams especially next year. He went on to say “The reality is that we did not have a full house of players like other high schools have, and so we are looking forward to having that, and I think that we will be able to compete with the stronger teams, like the Panther Creeks, the Green Hopes, and Jordan obviously, and that is what we are looking forward to.” As you can see Coach Solakoglu is very ready for next season and looking forward to all of the competition.

A big shout out to Coach Solakoglu for this interview. We know that bright things are on the horizon for Green Level Athletics and the soccer program.