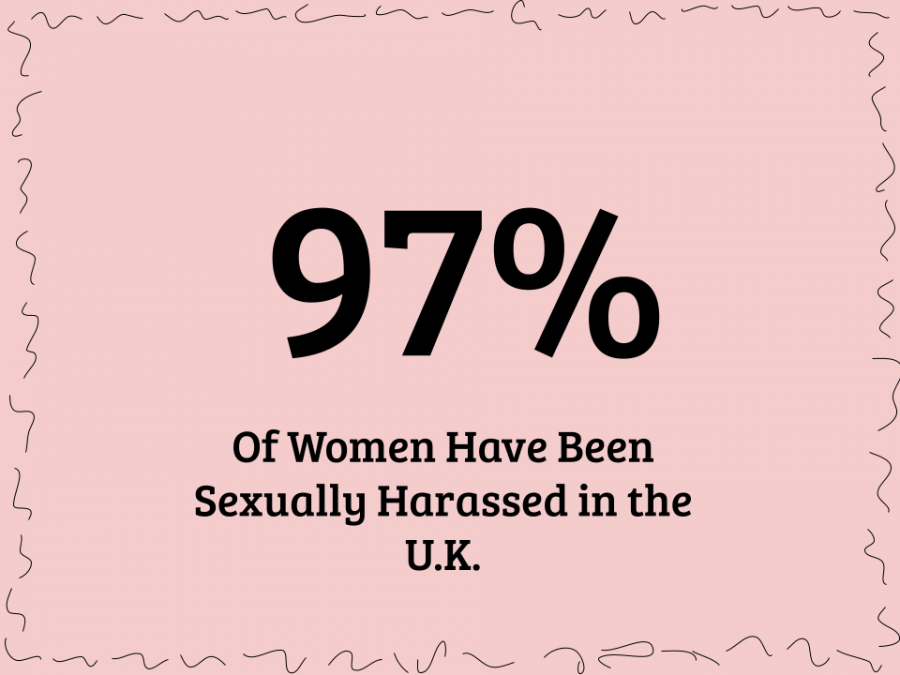 We need to do better.

What is the 97%?
Instagram feeds have been covered with one specific statistic: 97% of women in the UK have been sexually harassed.

The study was performed on over 1,000 women ages 18-24. The UK researchers created this study for the United Nations, leading us to believe that it is accurate.

It’s extremely important to note the age limit to the survey. After all, most sexual assault/harassment victims are younger or older than the ages surveyed.

Societal Impact
It gained popularity on social media platforms like Instagram and TikTok. As a result, many other sexual harassment victims are coming forward. Most are sharing their stories through inspirational-type videos or using humor to cope. Some are coming to terms with their experiences, while others are realizing that they are victims.

Controversy
Also on social media platforms, many men don’t believe in the UK statistic’s accuracy. Some make ‘jokes’ that the remaining 3% should join the 97%. They say that since only 1,000 women were surveyed, the statistic cannot apply everywhere. What they don’t realize is that the same logic can be applied to all statistics because that’s how statistics work, random surveys on small amounts of a larger population.

Even if the statistic is wrong, the fact that the number is over zero proves that there is still a problem with sexual harassment.

Jokes made by men who are disbelieving of the statistics are so unfunny and inappropriate. Women everywhere are scared for their safety, and instead of helping, some men decide to laugh about the trauma that isn’t theirs. They are also battling women online, who are claiming fear against all men. They reply saying “not all men”, but what they don’t realize is that there is no true way to make a distinction between the ‘good’ ones and the ‘bad’ ones.

The men doing the harassing are also fathers, bosses, friends, boyfriends, or others who the victims trust. It’s not always random men eyeing women on the streets.

Other men are showing their support and asking women what they can do to help. These are the men that deserve pats on the back.

Although this article has been information about a women’s sexual harassment survey, don’t forget that men also face this problem. A study talked about in MKFW Law says that 10% of males surveyed reported to have been sexually harassed at work. Another statistic says that “almost one out of every five sexual harassment complaints filed with the Equal Employment Opportunity Commission (EEOC) are filed by men.”

A quick reminder to be gentle with everyone, no matter what gender they identify as. You never know what people have been through, what hardships they have faced.