Diversify Your Bookshelf: 9 YA Books by Asian Authors 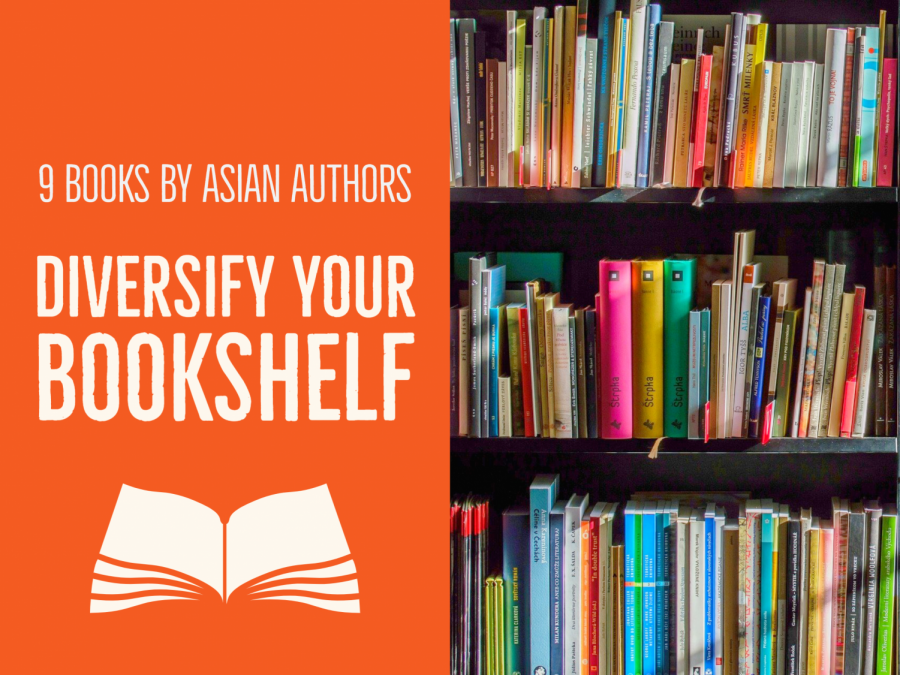 Think about the last book you read–and not for school. Maybe it was a day ago, or maybe months or even years. The time doesn’t matter (but if you haven’t read a book in years, please take a trip to the library for my sake if not yours) but was that story written by a white author?

There’s nothing wrong with loving white authors, but if your bookshelf is primarily straight white men, we have a problem. Let’s add some diversity to it with some Asian writers. There are some incredible fantasy, contemporary, historical fiction, and sci-fi stories just waiting to be read. Whether you’re an avid reader or feel pain during English class, there’s something in this list that’s meant to make its way onto your bookshelf!

The Poppy War by R.F. Kuang

The Poppy War is a Chinese-inspired historical fantasy following Rin, an orphaned student of the most prestigious military academy in their land, as she discovers her skills in the mythical art of shamanism. Rin’s new powers might be the only way to save her people, but winning their war could cost her everything. If you like dark fantasy books with compelling plots and dynamic characters, The Poppy War may be right up your alley.

The Astonishing Color of After by Emily X.R Pan

When Leigh Chen Sander’s mother committed suicide, she turned into a bird. As Leigh travels to Taiwan to find this bird, she learns about family secrets, grows closer to her grandparents, chases after ghosts, deals with badly-timed romance, and faces her grief. The Astonishing Color of After is a story about finding yourself through your history while discussing heavier topics such as depression and loss.

Spin The Dawn by Elizabeth Lim

Described as “Project Runway meets Mulan,” Spin the Dawn is an exciting fantasy about a tailor competing for a spot as the imperial tailor. In this competition, our protagonist Maia faces an impossible, mythological task that sets her on an empowering quest. Fans of forbidden romance, fantasy journeys, and cutthroat competitions will love this book.

The Henna Wars by Abida Jaigirdar

The Henna Wars is a contemporary novel about two girls in a rival henna business. Romance meets rivalry when Nishat, a Bangladeshi teenager, finds out that her crush Flavia is appropriating her henna for a school business competition. The Henna Wars is a fun read about friends and family that still touches heavier issues such as cultural appropriation, coming out, racism, and homophobia. It’s a very cute read.

Patron Saints of Nothing by Randy Pibay

Jay Rodrigo expected to spend his senior year playing video games and preparing for college. He did not expect to travel to the Philippines to uncover the truth about his cousin Jun’s murder. Patron Saints of Nothing is an eye-opening novel about the war on drugs and rediscovering your culture. It’s honest, heartwarming, and realistically deals with grief.

Under a Painted Sky by Stacy Lee

Under a Painted Sky takes place in Missouri 1969, where a Chinese American and a runaway slave disguise themselves as boys to run from the law. With the help of a gang of cowboys, the girls head for California. If you want an exciting adventure with well-written protagonists and strong female friendships, Under a Painted Sky is the book for you.

Set in a futuristic society plagued by pollution and disease that only the rich can afford to protect themselves from, Want is a sci-fi novel following Jason Zhou and his friends in a rebellion to take down the corrupt corporation that’s slowly killing the poor. It’s a perfect read for anyone who likes chaotically good found families and lots of futuristic action.

If you’ve read The Kite Runner, then you’re already familiar with the author of A Thousand Splendid Suns. The novel tells the story of two Afghani women who’ve together experienced three decades of Afghan history when their lives tie together as wives to the same man. It’s a heavy and more serious read, but it will stick with you forever.

The Gilded Wolves by Roshani Chokshi

Although The Gilded Wolves takes place in Paris, 1889, it’s definitely more fantasy than historical fiction. In order to get his rightful inheritance from a magical secret society, Séverin Montagnet-Alarie gets a band of chaotic nerds together for a mission rooted in mythology that could change their world as they know it. Fans of Six of Crows will love the group of magical misfits.