Netflix’s Shadow and Bone Leaves No Mourners (And No Funerals) 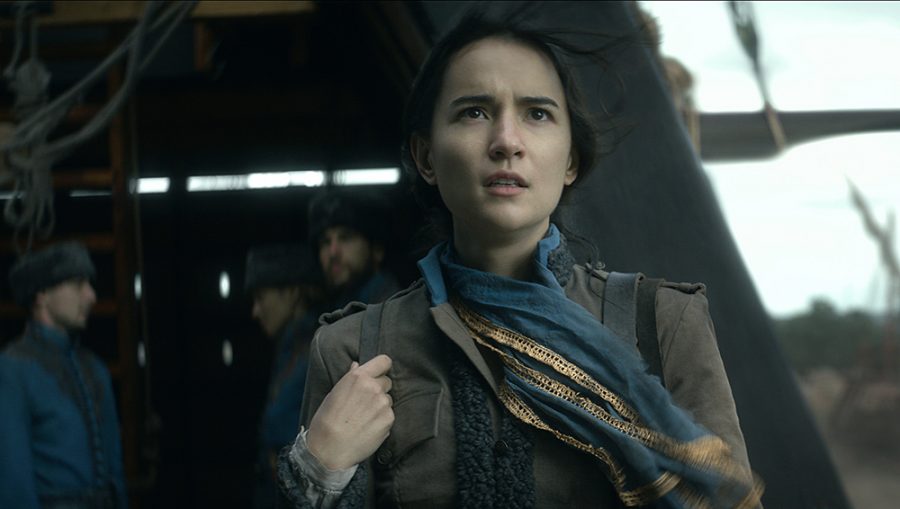 Shadow and Bone stars Jessie Mei Li as Alina Starkov, a mapmaker with a long-awaited power. (Courtesy of Netfix © 2021)

Netflix’s newest fantasy show, Shadow and Bone, finally dropped on April 23rd. The 8-episode miniseries is based on Leigh Bardugo’s Shadow and Bone trilogy and Six of Crows duology. As a huge fan of the Grishaverse, I’ve been following the production of the show for over two years–calling it a much-awaited release might be an understatement. After binging over the weekend, I knew that I had to share my thoughts.

A huge concern that I had was with combining the storylines of Shadow and Bone, a YA fantasy about a girl who discovers she’s the hero her country has been waiting for, with Six of Crows, a heist novel that I can best describe as fantasy Ocean’s 11. I was curious to see how Netflix would merge the chaos of Ketterdam (as I definitely prefer Six of Crows) with the saintly secrets of Ravka. And actually, I think they found an ingenious solution! Tying the duology in with an all-new story feels kind of like watching fanfiction, but in the best way. Freddie Carter, Amita Suman, and Kit Young are accurate to the Crows even in a different story, which was refreshing for a fan like me who’s too used to butchered adaptations of her favorite series. There was, however, one part of the show where Netflix had complete control to be as close to the books as possible–that being Nina and Matthias’s shipwreck. Danielle Galligan and Callahan Skogman brought fan-favorite characters to life with picture-perfect moments and direct book quotes. Although I have qualms with Nina’s casting (she’s a plus-size woman in the books) the actor’s immaculate chemistry was like a dream come true.

One serious issue I had was completely separate from the books: making our protagonist, Alina Starkov, half Shu. Shu Han is based on China, and having two Asian leading ladies in Alina and Inej (or three if we include Zoya, assuming the show continues long enough for us to reach Leigh’s second duology, King of Scars) sounds like an incredible step in representation. And it is! It’s just done gracelessly. Alina is constantly harassed and discriminated against in the first half of the show. If you’re going to show a WOC’s struggles in a predominantly white nation, you should do it with more tact than having white writers make up slurs and making your characters suggest magically changing her eye shape. I am not East Asian and therefore can only speak as a viewer, but from my perspective, them showing Alina’s identity this way seems crude. And if I can see it, the writers should have seen it too. Not only did we never see the actual country of Shu Han or its culture to balance out the negativity, but the racism also made no sense–one of the Grisha teachers (who had a much larger role in the books) is Shu and well respected. I would understand if we saw some of the actual conflicts between Ravka and Shu Han, but we didn’t. I think Alina’s race was a perfect opportunity to add more depth to her character and representation in the show. They just screwed it up in the process.

If you can get past the discomfort of those scenes, the show wasn’t half bad. I really enjoyed seeing all the characters, especially Mal, Alina’s childhood friend. I found him pretty bland in the books–not bad, just boring to read about. But Archie Renaux’s performance is perfect and brings so much new depth to his character. Ben Barnes is an incredible General Kirigan, and Daisy Head delivers some iconic lines as my favorite trilogy character, Genya Safin. But in my eyes, the real star was Kit Young as Jesper. He stole every scene he was in, and although I would have liked a darker-skinned actor to be more accurate to the books, the choice made perfect sense when we saw him in action. Freddy Carter’s Kaz Brekker did seem softer in the show, but as a book fan who loved seeing him more vulnerable, I couldn’t complain. I can’t wait to see if we get a season two–as a reader, I’ll lose my mind when Nikolai and Wylan finally join the action.

All in all, I really enjoyed Shadow and Bone. I expected another mediocre book-to-screen adaptation and had next to no hopes because of my love for the novels. But actually, I think this might be my favorite remake since The Hunger Games. The only other serious complaint I can think of is that the magic system may be hard to understand to a new fan. However, since I’m pretty familiar with it, I’m not sure if that’s actually the case. Overall, Shadow and Bone was immersive, entertaining, and never felt slowed or rushed. There’s plenty more I could go into about the show–the beautiful score and painful foreshadowing both deserve recognition–but I think you should just experience those yourself. To any fantasy fans: I would definitely recommend entering the Fold.