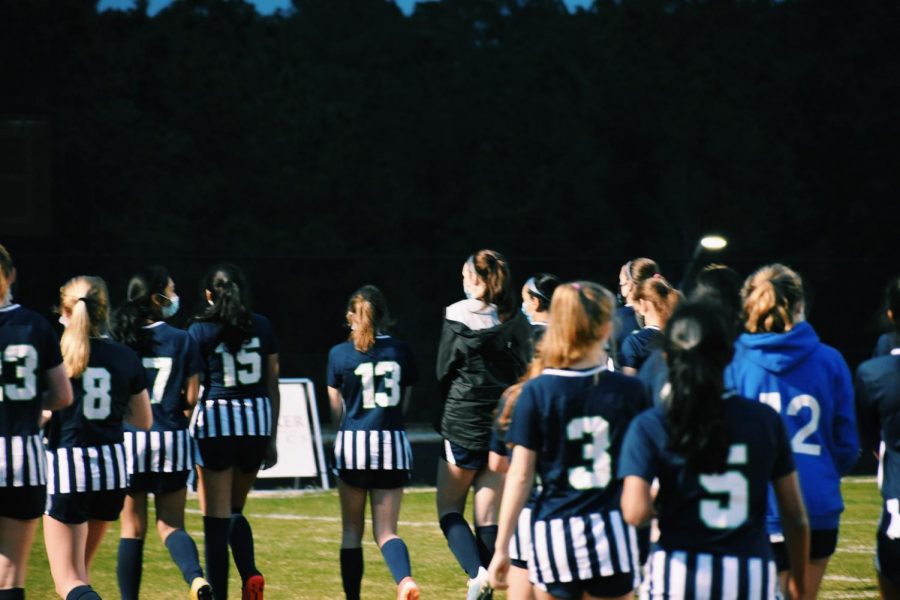 Our Gators competed this past Monday 4/26 in the Conference Tournament Semi-Finals. They battled against the Green Hope Falcons, but the Falcons were able to get 5 goals in and our Gators could not recover. The game resulted in a 0-5 loss.

Wednesday, 4/28 the team played against Panther Creek for the third time. Our Gators dominated the game firing a total of 17 shots on goal, but Panther Creek was able to get a shot in behind the net during the first half. The game resulted in a 0-1 loss. It might not have been the outcome our Gators had hoped for but it was overall a very intense and close game.

It was unfortunately the last game for our Women’s Soccer Program in the 2020-2021 school year. Let’s see what some of our Gator’s have to say as they reflect on the season…

If you could only use one word to describe the season, what would you use?

“I would describe our team like a family because I have gotten pretty close to some of my teammates, more than other teams I’ve been on”, Freshman, Madison Staton.

“One word to describe this season would be remarkable. I would say our season was remarkable because this is only the second year of the program and we did pretty great! It’s also remarkable that we had such a great season in such an unusual and crazy time. Having only freshmen, sophomores, and juniors on the team was also remarkable because we were playing teams who were heavily made up of seniors and we were hanging with them!”, Freshman, Addison Wilson.

How do you feel now that the season is over?

“Now that the season is over I’m going to miss spending time with my teammates. We have gotten a lot more comfortable around each other, and have become more like a very supportive family.” – Madison Staton

“I’m sad that the season is over because I will miss everyone and the environment that comes with the games and our team culture. I think that our team has grown a lot since our first game and we have gotten better and more connected over time and practice. I also feel good about how we closed out the season and am already excited about next year.” – Addison Wilson