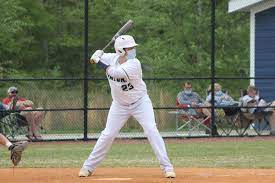 The Green Level Baseball season is just around the corner as we Green Level is preparing for their first game of the season. As the season is only a few days away, I was able to talk to a member of the Junior Varsity Baseball team, Theo Gooch. He is the starting catcher for the team and he also plays center field. He answered some questions about their upcoming season and this is his first year on the team as he is a Freshman at Green Level.

The first question I asked was, who are some players that you think will shine on the pitch this year? He said “I think we have a great pitching staff including Jack Welsch, Trey Roberts, and Chris Donaldson. I think you will be seeing them on the mound a lot this season, making a name for themselves.” I think pitching is a very key part to wins just like Theo stated, it may come clutch in crucial situations. Moving on I was able to ask him about his plans for the season and he stated “For myself I plan to put in some work as a catcher and get better to hopefully boost our teams’ chance at winning some games.” In my opinion I think Theo has a good opportunity to get better with good support around him.

As we moved on, we talked about the predictions for the season like record and who the most fierce competitor might be. Theo predicted that Green Level would end the season with a winning record due to our well built baseball team. He said that the hardest teams to win against might be Jordan, Athens Drive, and Green Hope as they might also have similar rosters to our schools roster. The last questions we talked about were the plans they had to win the most games as possible. Theo’s response to this was “I think the key for our team to win as many games as possible is to have good team chemistry and have a solid defense. Our hitting side of the game looks pretty good, but I think that we can strengthen our defense a bit more.” I agree it is key to have chemistry when playing any sports and defense might be the key to our baseball team’s first conference victory.

Feel free to come to the first baseball game as details will be provided soon.