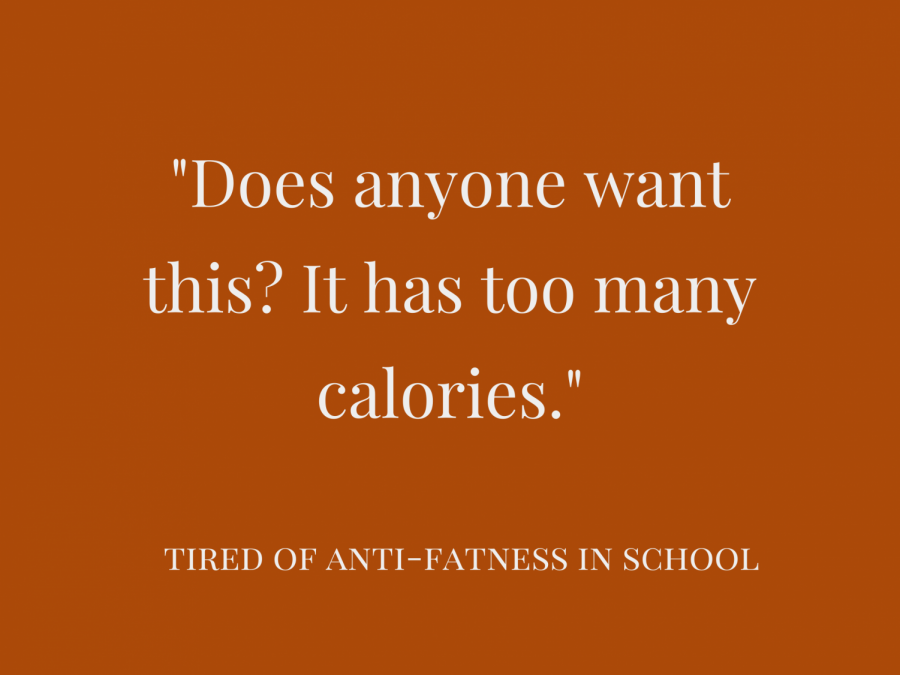 There's an anti-fatness problem in Green Level and Wake County.

A boy in one of my classes holds up a peanut butter and jelly sandwich to my table, “Hey, does anyone want this? It has way too many calories.”

The following day, I hear two classmates calculating the caloric intake of a man’s diet consisting of hot pockets for a science class, and after that, two other peers holding a discussion about how many grams of protein they’ve consumed so far in the day. I’ve been told by friends that bagels are bad for you because of their carbohydrates, and I’ve seen people get health-shamed for drinking a milkshake. Recently, someone even commented on how calorically dense the mooncakes I shared during Mid-Autumn Festival were. Complaints about metabolism and muscle mass seem to make their way into my day regardless of what class I’m in, people I’m around, or time of day it is: it is so tiring.

It is tiring because it has been this way for years. In the curriculums taught in our state of North Carolina and county of Wake and school of Green Level High about “healthful living”, students are forced to condense food into a numerical value. In middle school, students are forced to track calorie intake and expenditure, a triggering habit for those both with and without eating disorders. I remember writing a wellness plan in which I recorded my weight and body fat and whether they were healthy or not. Ava Dixon, a senior at Green Level, experienced disordered eating at the time and says, “I was already obsessed with [calorie tracking] at the time.”

Serving size, nutrition labels, macronutrients, and body mass index are to be analyzed in the NCDPI curriculum starting as soon as sixth grade. Kelsey Bohn, also a senior at Green Level, recounts taking her BMI for a health project, “Everybody was walking around and asking each other like, ‘Oh, what’s your BMI? What’s your BMI?’. People were coming over and taking my paper and looking at what my BMI was and comparing it to their own.” She says it doesn’t end there, “Your BMI does not determine how healthy you are but they really made it seem like that and it was just a really damaging thing to put ninth grade students through who are still learning what it means to be healthy.”

The influence of diet culture makes its way into high school in other ways as well: all Wake County health classes are to have students document physical activity, create meal plans, and study the most effective ways to lose weight. Dixon says she wishes food were not labeled as good or bad as taught in the curriculum to avoid all fast foods. “Nutrition should be taught neutrally with an emphasis on balance,” she explains.

Within lessons, content does not consider intersex people, transgender people, disabled people, poor people, or even lactose intolerant people who make up 68% of the world. They do not teach how to make a meal or cut fruit; how to find accessible healthy food; how our bodies’ weights are influenced by a pariah of factors including but not limited to hormonal and genetic changes, psychological issues, and traumatic events; conditions like amenorrhea and orthorexia; how to deal with comments on your body from family and/or friends; how anti-fatness stems from anti-Blackness and seeps into medical weight bias.

Bohn explains how she never learned about eating disorders, “It’s really taught like a multiple choice question.” But she emphasizes that through having friends who have struggled with those problems, it is so much deeper than that, “All the time I hear, ‘Why don’t you just eat?” or “Just don’t throw up”, and people don’t understand it is a mental health condition.”

Furthermore, she states that a lot of peers suffer with body dysmorphia and different disorders, but do not even know it.