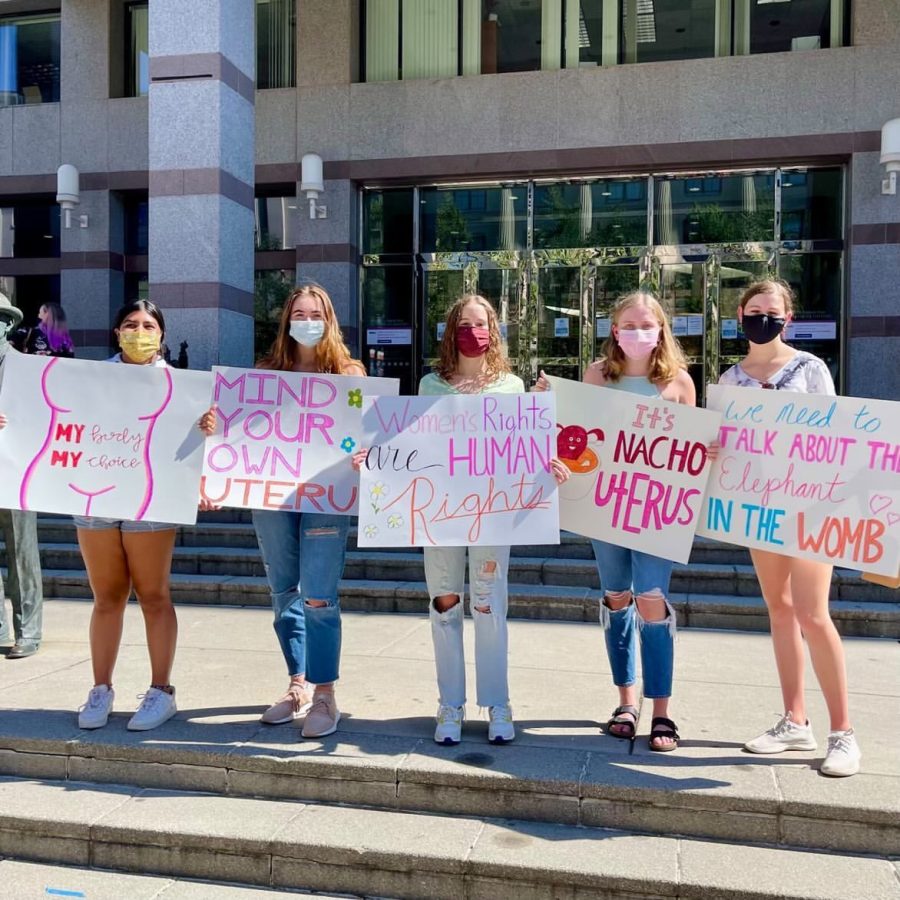 On Saturday October 2nd, rallies for abortion justice occured in hundreds of cities across the country. In Raleigh, Green Level students were part of the Bicentennial Plaza crowd.

The demonstrations were triggered by the anti-abortion laws in Texas. The laws prohibit abortions once a heartbeat is detected in the embryo which typically occurs in the sixth week of pregnancy and is prior to people being aware of their pregnancy. The law does not make exceptions for cases of incest or rape and went into effect in September despite Roe v. Wade due to a loophole system of enabling private citizens to file lawsuits and sue abortion providers and others involved in an abortion case.

Janani Solaippan was one Green Level student who attended the rally and explained her reason for protesting, “Because we’re in a red state, it’s so important that we advocate for abortion rights especially now.” She also included that, “The purpose of the rally was to show our support for the Roe v. Wade case and send a message to the Supreme Court saying we wouldn’t stand for their negligence.”

Victoria Plant was another student who attended and went through similar points of continuing the conversation, “The Texas law is a blatant violation of our human rights, not to mention the precedent it could set if it results in Roe v. Wade being overturned. We also felt like we had to make some noise and let the whole country know that this kind of violence will not be tolerated.”

Additionally, organizers of the march stated that the Texas law was also, “An attack on affordable healthcare services for working class people, who will lose access to free and low-cost reproductive healthcare if abortion providers are forced to close due to costly legal battles.” They stated that restrictions placed on abortions will not stop abortions, but rather increase the danger of abortions. In regard to the state of North Carolina, 91% of countiesdo not have any abortion providers.

Furthermore, there are other significant and upcoming cases like the anti-abortion law from Mississippi, which would go directly against Roe v. Wade in the Supreme Court.

During the demonstration, the march through downtown Raleigh was followed by speakers who ranged from survivors to a gynecologist. They shared personal stories and discussed the new Texas ban on abortion. Victoria Plant, another Green Level participant, recalls, “There were so many more people than I expected and the atmosphere was electric.”

While the news regarding abortion had created lots of anger and fear in the crowd, the march allowed for a new energy. There were masses of pink clothes and posters, and Plant described how it was among the crowd, “I felt empowered to be among so many strong and passionate people. It gave me hope to see people advocating for our rights and participating in the political process. It shows that if enough people really care about an issue, public opinions can influence policy eventually,” Plant described.

Solaippan had a similar experience, “Just seeing the amount of people that showed up, both men and women gave me hope that things may actually be ok.”