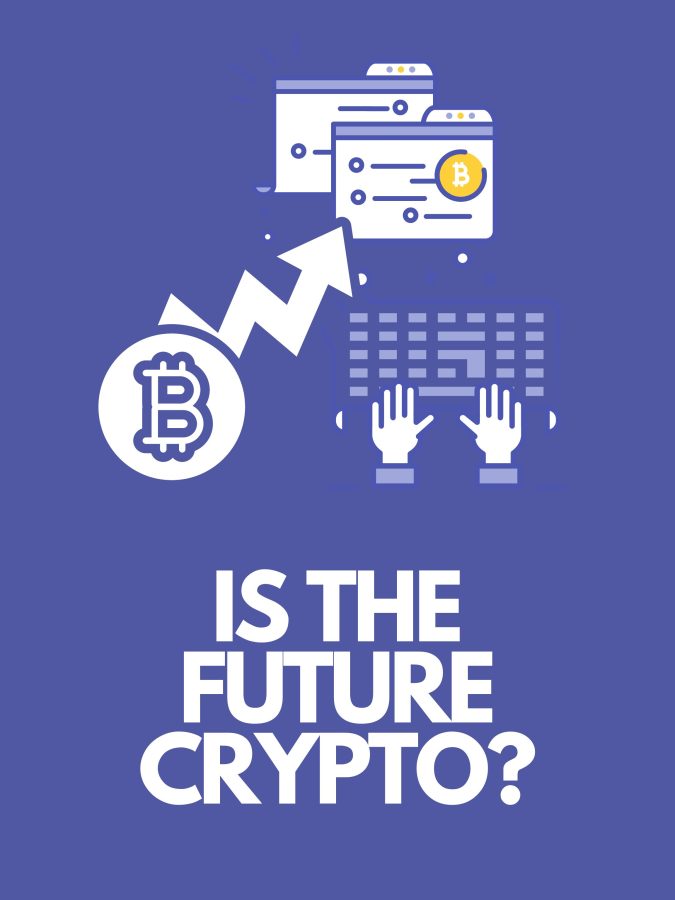 The cryptocurrency market has been booming - so what is it really? Graphic by K. Peechu.

From 18 million Bitcoins to artworks sold for tens of millions of dollars, cryptocurrency is a rising phenomenon, but what exactly is it?

Cryptocurrency can be defined as digital coinage that is secured by cryptography, or secure communication techniques, protecting it from counterfeits and double-spending. Cryptocurrencies are organized as decentralized networks based on blockchain technology.

Created in 2008 by an unknown person or group of people under the name Satoshi Nakamoto, Bitcoin is considered the first cryptocurrency. The creation of Bitcoin was spurred by the economic conditions at the time. The Great Financial Crisis, or the Great Recession, is considered the worst U.S. economic disaster since the Great Depression of the 1920s and ’30s. The “widespread failure of the traditional financial system” provoked Bitcoin’s founder into developing a currency that the people could trust to be free from government intervention.

Cryptocurrency has been a rapidly growing “industry” in recent years, with alternatives to Bitcoin such as Ethereum (ETH), Dogecoin, and more prospering under the current economic environment, with Bitcoin even becoming the national currency of El Salvador. Part of the appeal of these platforms includes the security of a blockchain system.

A blockchain system, developed for the Bitcoin network by its founder(s), is made up of digital files recording transactions, which are then duplicated and spread throughout the entire network of computer systems on the blockchain. Each block contains a certain number of transactions, and for every new transaction, all participants’ ledgers will keep a record of it – this being the main selling point of cryptocurrencies. It is difficult to change, cheat, or hack the system, and there is no one person or group in charge; instead, the network is run by the users themselves.

The idea of decentralization is prominent in one key application of cryptocurrency: decentralized finance.

Decentralized finance (DeFi) can be described as an ecosystem of smart contracts on the blockchain system. Prevalent in currencies such as Ethereum and Solana, non-software-based middlemen are unnecessary in these deals between parties, like banks or brokerages; participants work out conditions, amounts, and times on their own. This strategy is a glimpse into “a world without banks”, with DeFi seeing a massive amount of growth in recent years, boasting numbers up from $4 billion to $93 billion between 2018 and 2021.

Under the umbrella of cryptocurrency falls another digital valuable that has been gaining popularity since March 2021 after artworks were sold for millions of dollars: NFTs.

NFT stands for “non-fungible token”. To break it down, for something to be non-fungible means that it is unique and irreplaceable. For example, dollar bills or bitcoins are fungible – you can trade one for another of the same value, and you will have the exact same amount you had before. But an asset like a one-of-a-kind trading card cannot be exchanged for something just like it, meaning it’s non-fungible.

NFTs emerged from “colored coins”, which were initially distributed on the Bitcoin blockchain in 2012-2013. The digital assets, frequently traded through cryptocurrency, include art, music, in-game purchases, and videos.

The cryptocurrency industry is rapidly evolving and there could be more applications of it in the future but one thing is certain – cryptocurrency is here to stay. With a 2 trillion dollar market size that is constantly growing, cryptocurrency has to potential to become the new global economic paradigm.