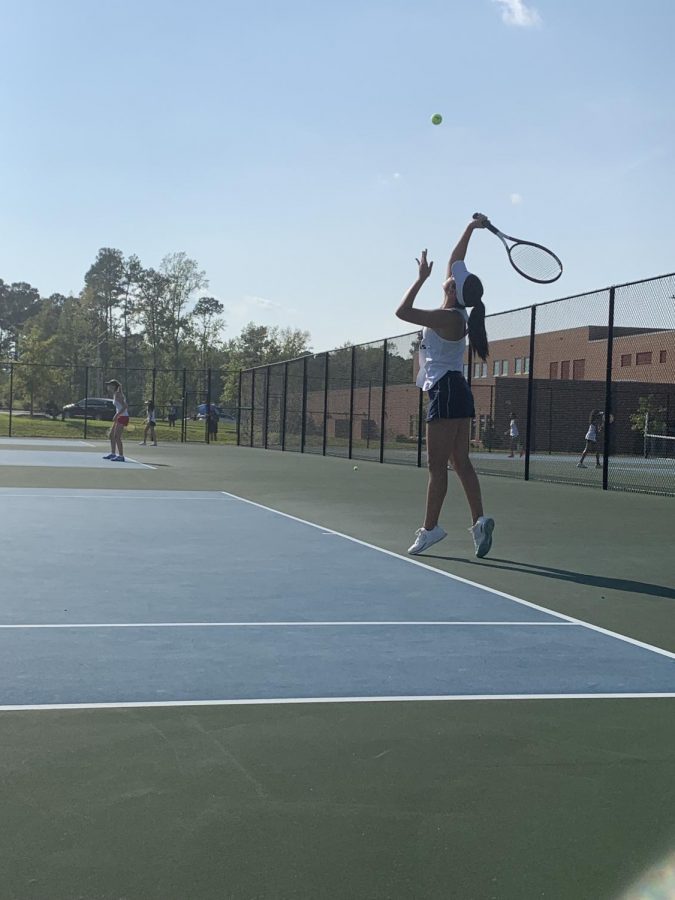 Alice Kim serves one up for the Gators.

The Green Level Women’s Tennis team won their match against Jordan High School in the Tri-8 conference Wednesday night. The young team is currently undefeated in the tournament and Wednesday they fought their hardest game with a tight score of 5-4.

The Gators were still chomping down on matches as parents were strolling in to meet the teacher–the entire match lasted three hours. Even though two members of the team were injured and unable to play, the ladies still pushed through and managed to play incredibly well and show impressive efforts in the matches.

But where did the team truly shine last night? Teamwork–something Coach Sushil values as a key aspect in tennis. The impressive doubles matches were where the team reached the most success. Diya Ramchandani and Tanvi Sapre were both remarkably aggressive last night in taking a win, but they weren’t the only great doubles team.

As the sun began to set, the score read 4-4, and the doubles team with Sania Musti and Arya Kalluru were to determine the Green Level tennis title. The pressure rested on their shoulders, but in the end “We pulled through,” Musti said with glee. Kalluru added, “Even though it was getting dark, Sania and I had a lot of pressure on us. We had never played doubles together before, so we had to trust each other and have confidence.” Their strategy was simple but difficult: get the ball in. They would tell each other, “Breathe in, breathe out. We got this.” Kalluru also said the cheering from the rest of her team was a huge factor in their win.

Bridget Bensal, a member who played both singles and doubles with Pranathi Chintala said, “I think we have a great team, and I’m excited to see what we can keep doing.”