Remember Remember the Fifth of November 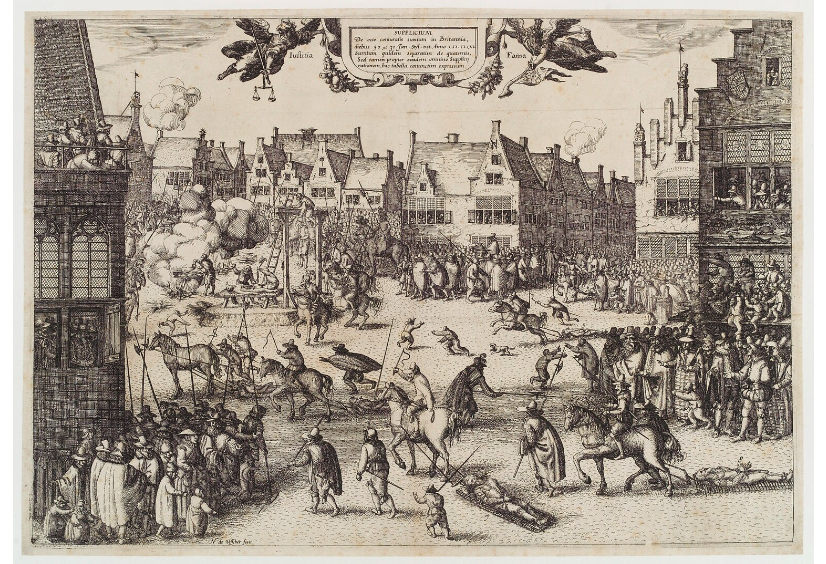 'The Execution of the Conspirators in the Gunpowder Plot' by laes Jansz Visscher, 1606.

Guy Fawkes night is celebrated on November 5th. The holiday honors the failure of the gunpowder plot, which was a conspiracy to blow up parliament on the reopening day and kill King James to bring back Catholicism to protestant England. Think of it as the British Fourth of July, but instead of celebrating the signing of a paper, it is the celebration of the failure of all involved with the gunpowder conspiracy.

“Remember, remember the Fifth of November,
The Gunpowder Treason and Plot,
I know of no reason

Why the Gunpowder Treason
Should ever be forgot.”

This is a children’s nursery rhyme written by the famous British author John Milton. This poem was written on the eleventh anniversary in celebration of the failure of the plot. This poem is taught to every kid in England as a way to remember the gunpowder conspiracy.

Before we get into the story, let’s see some background history from the England National Archives. Queen Elizabeth the First was known for many things, such as sponsoring William Shakespeare, imprisoning Mary, Queen of the Scots, uniting the churches of England under the crown, defeating the Spanish armada, being the daughter of Henry the Eighth, and being tough on the Roman Catholics to the point it was a crime to practice any of their religious beliefs. Following her was King James the First (son of Queen Elizabeth’s cousin, Mary, Queen of the Scots) who, just like his predecessors, was very tough on the Baptists (Roman Catholic Believers) of England.

There were eight main perpetrators to this conspiracy, with the plan being that Guy Fawkes would blow up Parliament with 36 kegs of gunpowder while the others would go midland to Coombe Abbey and kidnap King James’ daughter (Princess Elizabeth) and use her as a figurehead to make the crown fairer on Catholic believers. This failed horribly because one of the perpetrators (suspected to be Francis Tresham, Lord Monteagle’s brother-in-law and the most reluctant co-conspirator) sent a letter to Lord Monteagle to not attend Parliament on the day of its reopening. The letter was passed along to Parliament, which later on caught Guy Fawkes in the act. Guy Fawkes vehemently claims that he was John Johnson when he got caught, pretending to be a servant (with a lighter and a timer) of the lord who rented out the place Tomas Percy.

The rebels knew they were discovered on November 1, but continued hoping that Parliament didn’t know their explosives expert, Guy Fawkes. This ended up with him getting caught when the King James guards checked around Parliament the night before the scheduled reopening of Parliament on November 5th. At first, they found him with firewood, and his explanation was accepted. On the second round, they found gunpowder within the timber, which promptly got him arrested. Later on, he was integrated but admitted nothing. On November 6, King James authorized torture (some children learned that the angels came down from heaven, tied Fawkes limbs, and pulled, or were given a paper replica of Guy Fawkes to torture) which gave the rest of the conspirators away. They were tried for treason within the very place they try to blow up, Westminster Hall.

Later on, the people who weren’t caught went to Holbeach House in Staffordshire to raise a rebellion against the King. This failed and they later promptly got raided and the people within it killed. Though they did try to keep the masterminds, Robert Catesby and Thomas Percy both died in the subsequent shoot-out. The remaining were rounded up and imprisoned, some dying within it, but the rest were tried for treason and punished.

Punishment for treason was very cruel. First, the rebels were dragged out by horse, then were hanged, and then had their limbs ripped away and be disemboweled and burned right in front of the criminal’s eyes. This was all done publicly. Then they got beheaded and had their skull displayed on a pike on the roof of the House of Commons or on the White Tower.

Around the time, Catholic people were treated even worse for being connected to the gunpowder conspiracy. Even when King James said that Catholics were not inherently traitors and had them denounce the pope and swear loyalty to the English crown, the laws that persecuted the Catholic believers didn’t get removed for another 223 years. When the rest of London heard that the gunpowder plot failed on November 5th, they were so relieved that they built big bonfires burning anything related to the Pope or the devil as a celebration. Nowadays, instead of the Pope, it’s Guy Fawkes or just burning things.

To this day, many places set up bonfires and shoot off fireworks to celebrate Guy Fawkes Day. Many at the time, they try to make the holiday have a much more positive meaning than what the celebration actually sprung from. It springs a different meaning instead of what it truly was, which no doubt had something to do with Fourth of July being similar pushing forth the idea of national pride and patriotism. While this holiday probably isn’t celebrated in the USA, saying it has no impact is a lie. We may not have seen nor experienced the impact of the gunpowder conspiracy, but it rippled throughout England and impacted many lives. We have even seen it impact popular media such as the movie/novel “V is for Vendetta” which revolved around the gunpowder conspiracy and sided with Guy Fawkes and the other conspiracists.

Personal ideas and events change as time moves forth, and we all have different views on the same thing. Nowadays, people view Guy Fawkes’s day not as a celebration of brutal oppression and torture but instead as a day to be proud of being British and to shoot fireworks off and burn unwanted things.