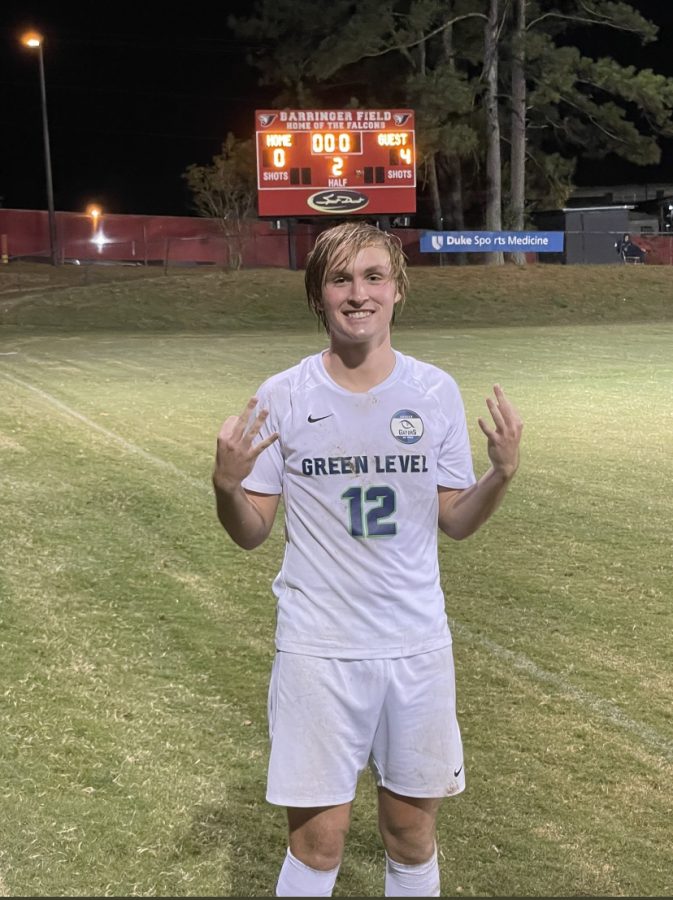 Ethan Sthole, pictured above, had an outstanding performance monday night, leading the gators to their playoff victory. Photo Credit: @G_L_MSOCCER

On Monday night, the Gators battled it out with Jordan High School, taking the lead with an impressive 4-0 win. The team was able to easily defeat them, scoring the first playoff victory in the history of Green Level High School. This truly is a monumental event this week, and the soccer team is incredibly proud, and excited to continue their season on to the next game this Thursday against New Hanover High School.

The Gators were able to score an early goal, and set the tone for the rest of the game, from then on they were able to score three more points and secure the win. I spoke with Thomas McPherson, a junior at GLHS, after the game to get an idea of how they are feeling after this great win: “The team has been doing an incredible job working together as a family and we are playing to win. Ethan Sthole had a heck of a game and everyone contributed to this big win”. Ethan, a Senior at Green Level, scored three impressive goals Monday night, in an incredible performance to help bring the team to victory.

New Hanover, the teams next opponent, is the number one seed in the 4A east, and is expected to be a challenging matchup for Green Level, however the Gators believe that they will be able to pull it off. Joshua Murray, a senior at Green Level, says “I expect it to be a battle all game since they are the number one seed in the tournament, but I believe that we were seeded way lower than we deserve so I wouldn’t be surprised if we were in the third round after Thursday’s game”. Taylor Peterson, a Junior, says that he is excited about their next match: “I think if we can put one away early and then focus on defending we have a solid shot at beating them.” Peterson says that he doesn’t want to take anything for granted, and is really happy with their season so far.

Best of luck to the team, as they head to the second round match against New Hanover, and congratulations on their first playoff win!