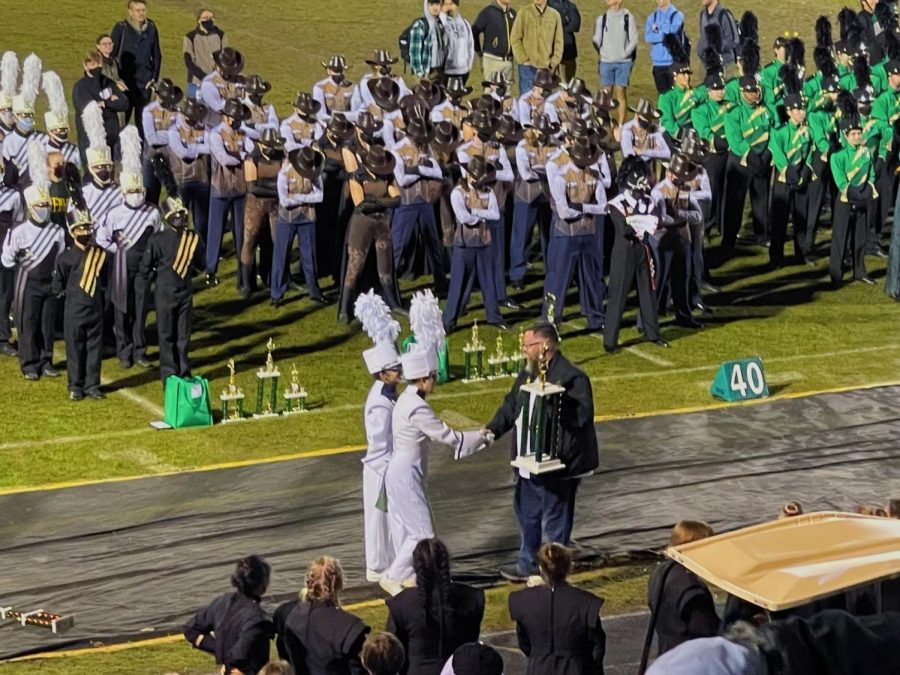 Brian Myers, the Green Level Marching Band Director, reflected on the Cary Band Day win, “It was definitely a huge accomplishment.” But he notes that it wasn’t necessarily due to the Grand Championship title, “One of the things that we talk about is that it is our job to make sure that we are as good as we can be, because that is the only thing that we have control over.” Myers noted that marching band is subjective and that many external accomplishments like awards do not capture factors like professionalism, “We just have to take care of our business and do what we can and from there and especially this year, everyone who was able to be there was a winner.”

Band members felt that way as well. Sara Abell, who is a trumpet section leader, described the energy during the performance, “We were all super excited, but we were also able to stay in control throughout the show. It was extra special because it was our last time performing as seniors.”

Last night we wrapped it all up with our last competition, Cary Band Day! We won our 4th and Final Grand Champion with this show.

Thank you to everyone who made this season possible. This show was beautiful and one for the books. pic.twitter.com/UnxN0cLJdB

The 2021-2022 school year was also the first season with seniors like Abell. Myers said he was especially sensitive to the seniors due to their switching of schools and coming from well established schools and programs, “My goal was to make this year special for the seniors.” The seniors have been part of the Green Level Marching Band since its foundation, “They’ve been my ‘seniors’, my leaders for three years. That’s a big accomplishment,” Myers explains.

Abell, being one of those leaders herself, reflected on the past three years, “Being a leader for three years has taught me so much about myself and what it means to mentor and support others. I couldn’t have asked for a better show to close out my last season. “A Light in the Darkness” is something I will never forget.”

GLMB Senior Dinner to celebrate before the last football game and last competition this weekend! Our program will be forever grateful for the invaluable contributions and leadership of these incredible young adults. Congratulations for an amazing marching band season! 💙🎶 pic.twitter.com/OPAkzodoTQ

No matter the grade level, Marching Band has created a strong sense of community among all its members. Abell notes her own place within the organization, “There are many places to find a sense of community in school, but I feel like we have something truly special here. I know this is super cliche, but band really does feel like a second family. My class has been through a lot and band has only brought us closer together.” Myers says that connection is due to the kids, “We can set a foundation as adults but if the kids don’t foster that sense of community, then it doesn’t matter what we do.” He emphasizes the role of the student leaders and how they brought everyone together despite the different instrumental sections, “In some ways, music just organically brings everyone together and certainly there is a unique-ness about what the kids bring to build that sense of community.

Furthermore, Myers notes how the isolation of the pandemic allowed staff and members of the band to appreciate being together, “I think to some extent, the kids are just excited to be back with music again.”