Why We Should Honor the Pledge 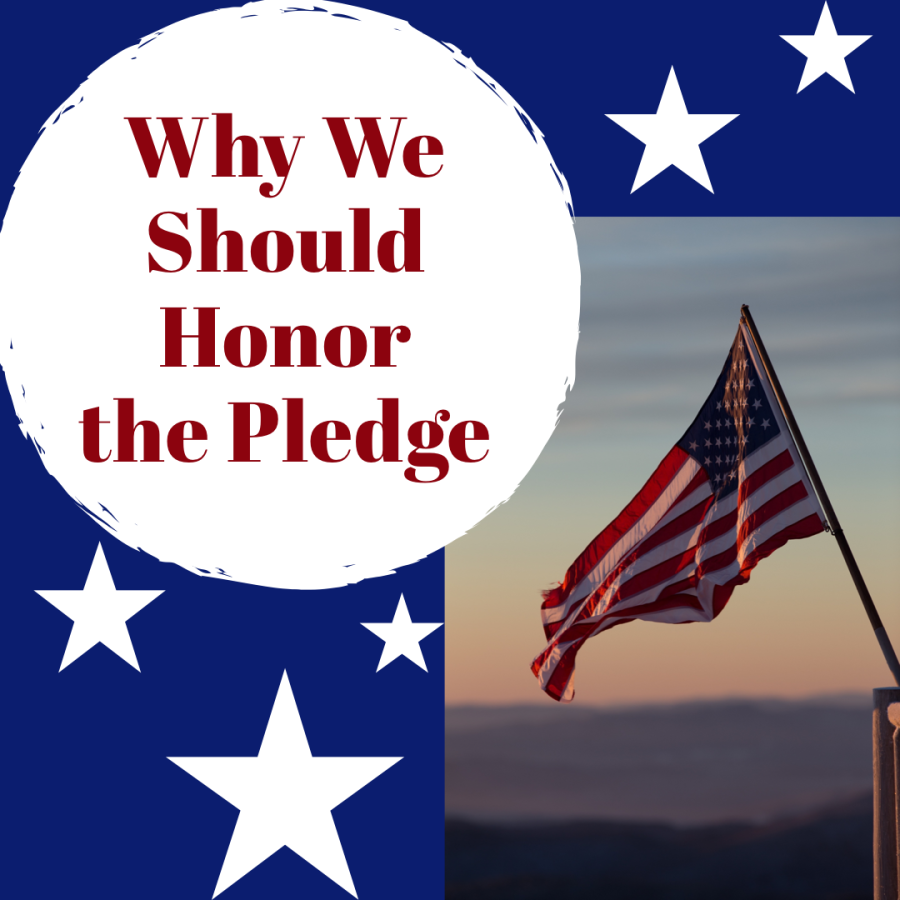 Graphic by C. Andrews & Image of flag from Pexels.com

“Patriotism is not pride in the pain of our nation’s past. Rather, patriotism is pride in the principles that paved the way for change, whether that change was trading royalty for representation in 1776 or exchanging enslavement for emancipation in 1863… We stand not because of past or present pain caused by injustice, but to salute the principle of justice.”

Our founding fathers believed that our rights were inherent to human beings, not granted by the government. This was a radical and shocking idea, for their time, and those who signed the Declaration of Independence were, essentially, signing their own death warrant. These extreme measures taken to guarantee that we do not lose our fundamental rights are remarkable. A betrayal of allegiance toward one’s country was an act of treason, one that was punishable by death and no quick and painless death at that.  The multitude of people who have died to safeguard these rights shapes who we are as Americans.

If Americans begin to believe that the flag is more a symbol of oppression rather than a beacon of hope, it will gradually undermine the ideals by which our country was founded, ultimately leading to its downfall.  Dismantling the foundations and principles that constitute the basis for our country’s creation would eventually lead to its collapse. Anyone who has lived under Communist rule, a dictatorship, or any form of tyrannical government power can attest to this.

Below is the pledge of allegiance in its entirety. If someone, especially a student, disagrees with these words, they are not forced to pledge their allegiance. This is the beauty of the pledge; it does not compel or coerce any person to recite it against their will. They have the freedom to make that choice themselves. Our inalienable human rights, on which our country was founded, including our right to freedom of speech, comes from God, not government, and no government official should have the power to stop someone’s ability to speak about what they do or do not believe. The flag itself speaks to this, as is seen below.

Yet, the pledge asks allegiance to a principle, an ideal, not an allegiance to its scars, atrocities, or injustices; to do so would defeat the purpose of pledging allegiance to anything also does not ask allegiance to a specific president or party. It only asks for your loyalty to strive toward the principles of liberty and justice for all. It asks for your willingness to be united and dedicated towards the goals it espouses. So, rather than tear down, divide, shame, and blame, we must strive to live out what the pledge asks of us as citizens. Rather than speaking out under the protection of the flag while at the same time trying to dismantle it piece by piece, examine it at face value and ask yourself this one question: Can I pledge allegiance to this flag, to its principals, to its ideals and in turn help the country manifest and live up to all that it asks?

I…a citizen of the United States of America…pledge allegiance…my loyalty…to the flag…“The stripes represent the original 13 Colonies and the stars represent the 50 states of the Union…red symbolizes hardiness and valor, white symbolizes purity and innocence, and blue represents vigilance, perseverance, and justice.’”...of the United States of America. And to the republic…a state in which the supreme power rests in the citizens who vote and this power is exercised by the representatives chosen directly or indirectly by the people…for which it…the flag…stands, one nation…united, under God…subordinate to God…, indivisible…unable to be divided or separated…, with liberty…the freedom to do as one ought to do, not whatever one wants to do…and justice…right order, rewarding to everyone that which is their due…for all…the human race.