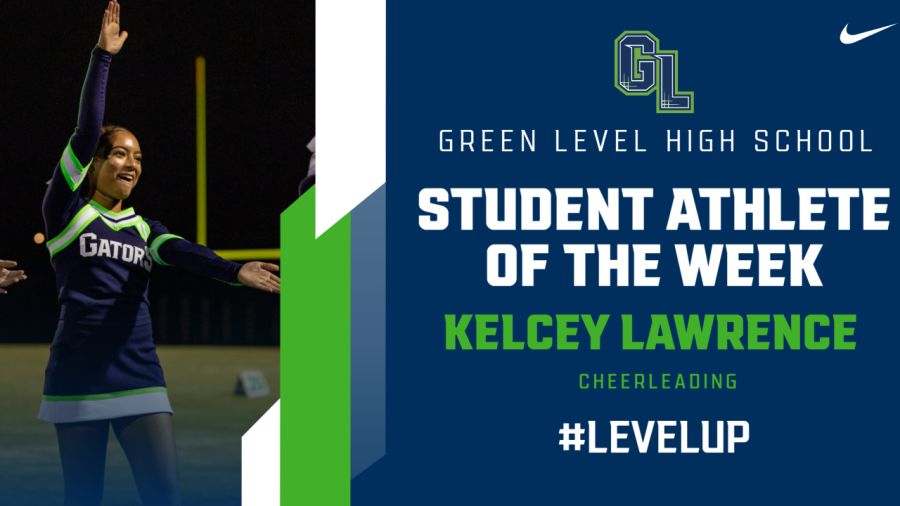 Kelcey Lawrence is a Senior at Green Level High School who has been on the Varsity Cheer team since the very beginning. For the past three years she has been a leader and big component of our Cheer team. This week, Nov. 8-12, she was named Student Athlete of the week. I was able to talk to her about how she felt in regards to receiving this award and she said:

“I was really surprised when I heard that I received Student Athlete of the week because I was in class and my internet wasn’t working so I had no idea until somebody showed me on twitter. I was just really surprised and thankful.”

She went on to mention that she was immediately curious as to who nominated her, even though she knew she would never find out.

With Kelcey being someone who has been on our Cheer team for the past three years she has described her experience as very fun and something that has kept her going, especially through Covid. She says that she loves the team and loves the girls and that what they have is like a sisterhood. Cheer has pushed her to get through High School and has left her with something special to hold onto.

Cheer has their first big competition on Saturday, known as Pre-States. They have been working really hard on their routine for months. Lawrence informed me that they have had three concussions and two separate injuries that the team, as a whole, has had to persevere through. Through all the ups and downs they have worked really hard to put together their routine and now it is looking great as they prepare to head into Pre-States, which they are hoping to do good in to give them momentum for future competitions.

Congratulations on this award Kelcey and Green Level wishes the Cheer team best of luck at Pre-States!