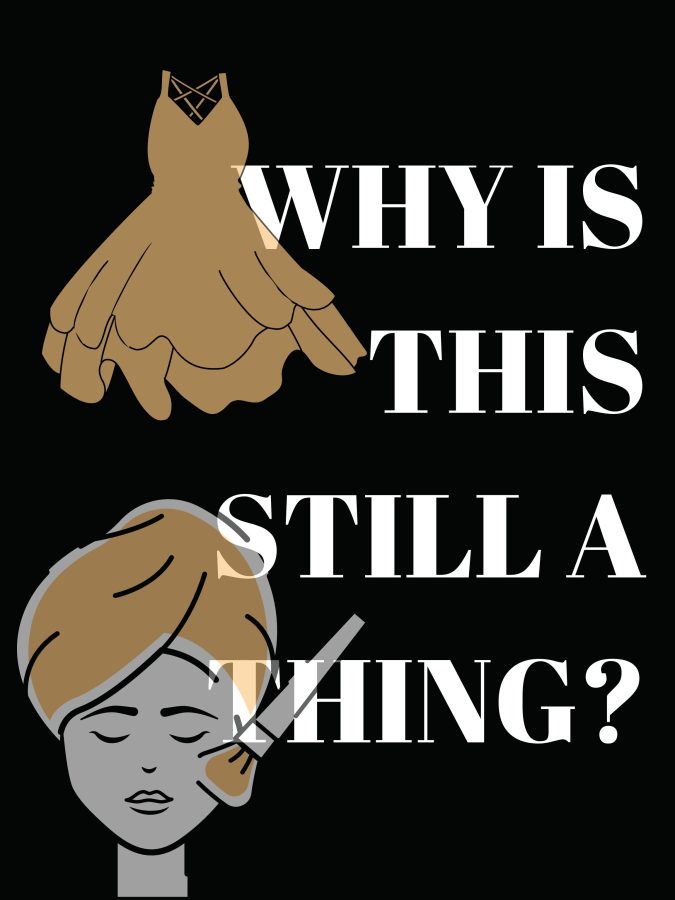 It's gone on for too long. Graphic by K. Peechu.

The idea of a beauty contest has been around since Ancient Greece and the Judgement of Paris. But the first modern beauty contest can be traced to Phineas T. Barnum or better known as P.T. Barnum.

Beauty pageants take place all over the world, with both female and male contestants, even children. And I believe there is a need for change in the industry. Beauty pageants cause many issues for its contestants both mentally and physically and that’s something the industry and that many other companies profit off of.

These pageants or competitions can lead its contestants to suffer with eating disorders, depression, body dysmorphia, body dissatisfaction, and a lack of self confidence. And even for those who only participate with them in children the issues are life lasting. In a study done by pubmed, “self-esteem, dieting, and body image of 131 female beauty pageant contestants (mean age 26.0 years) from 43 states were examined by an anonymous survey. … Over one-fourth (26%) of the women had been told or perceived they had an eating disorder which reportedly began at 16.25 years. Almost half (48.5) reported wanting to be thinner and 57% were trying to lose weight.” If these are the statistics of just 131 women imagine how many more beauty pageant participants suffer from the same issues. Issues that not only affect them mentally but which can also affect their physical state and health. Around 250,000 children compete in pageants in America every year, using the statistics from the study mentioned previously this would mean that around 65,000 children could suffer from eating disorders every year, just in America. And this huge number doesn’t even include the thousands of other adults who suffer from eating disorders.

Many people argue that beauty pageants should be kept around because of how they help build self confidence and how in the end they aren’t all about looks. According to, cyra-aggrawal.medium.com, “The women and girls who lost beauty pageants can get bullied because for some reason they are not beautiful anymore. … Some of those ladies and girls can have prowess in other things either intellectually or they can be awesome in the arts, and sports. But, just because they lost the beauty contest they won’t be acknowledged anymore.” So if looks aren’t the only things beauty pageants are about, then why are these participants being bullied or harassed because they lost the beauty portions of a pageant even if they’re incredibly smart or talented and dominate in the personal interviews or talent portions?

With a 5 billion dollar industry, beauty pageants make a lot of money. Not only do the people behind and a part of the pageants make money but so do sponsors, clothing brands, and cosmetic companies, and even the television industry.

According to npr.org, just to be taken seriously, pageant participants would have to spend anywhere between 500 – 2000 dollars for a gown (sometimes even more), $200 for an interview outfit, accessories, shoes, and $50 to $300 on a swimsuit, and that’s only the clothes. Even more money is spent on makeup and even makeup coaching which ranges from $40 to $300 per hour. Companies start making profit at the beginning from when competitors begin preparing and continue to do so throughout the contestants’ whole lives. Makeup companies advertise and market their products in a way which guilts their customers or makes them feel bad about themselves. With taglines like, “Take years off your face” “those extra pounds will vanish” “clear up your acne instantly” and more, makeup companies target those who are insecure about themselves and their appearance.

An effect of beauty pageants is self image issues, so having all of these makeup companies advertise in a way that takes advantage of those who are insecure means that these companies are all profiting off of the insecurities of others.

Beauty pageants also have a lack of diversity. As much as the organizers and others claim that diversity is shown, that there are lots of people from different cultures, religions, places who participate in the pageants, people who are not white still get discriminated against. And of course if you look at competitions like Miss Universe or Miss World you’re going to see diversity. People from all over the world take part in those pageants, but when you get more local the pageants do not have that level of diversity. In a bbc news article,  the first black woman to win Miss Massachusetts, Gabriella Taveras, said how “she’s also faced colourism – or discrimination based on skin shade – while competing. She has a dark complexion and said some people didn’t find her skin colour to be beautiful.” This shows how no matter how much pageants claim to be diverse, they are still discriminatory against those who are not white and who don’t have whatever is the “ideal body type.” Gabriella Taveras along with Deshauna Barber said how they were both told that they didn’t deserve their title (of pageant winner) and that the only reason they won was because they were black. That they were used as some sort of “tool” to prove pageants had diversity.

An argument I heard surrounding beauty pageants (and one I thought was absolutely absurd) was that “beauty pageants have been around for a long time so why do they need to be changed?” Pageants have been around for decades but they have also had a racist origin and have been used to degrade and objectify women for entertainment and sometimes men’s pleasure. According to pbs.org, “at some point in the 1930s, … instituted under the directorship of Lenora Slaughter, rule number seven stated that ‘contestants must be of good health and of the white race.’” Is that something that shouldn’t be changed? Should people be stopped from doing the things they want to because they are not white? The same type of argument could be made for many different scenarios as well. Women didn’t have rights for centuries so does that mean there was no reason to give them rights?

Overall I believe that beauty pageants in their current structure need to be revised and changed as soon as possible. As times change so should our ideals, our rules, and our practices. There is no reason for our society to continue upholding the current structure of a beauty pageant when they cause so much damage and harm to young children, teens, and even adults both physically and mentally.

Green level students can help start making a change by signing petitions and researching into how harmful beauty pageants really are.