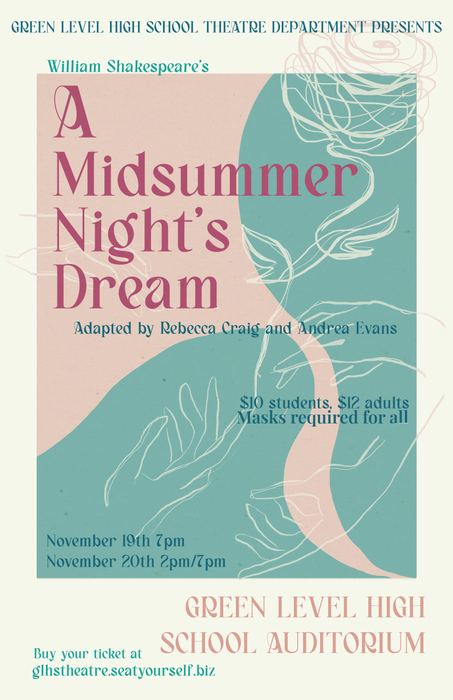 This week, on Friday, November 19th and Saturday, November 20th, the first in-person play will commence. Students will be performing “A Midsummer Night’s Dream”. The Navy cast will be performing on the 19th and 20th at 7pm, and the Green cast will perform on the 20th at 2pm. You can buy the tickets here only for in-person as there are no virtual options available, and please wear a mask. We had an interview with Sarah Bowman, who will be playing Hermia in the Green cast, along with the headteacher Rebecca Craig.

Sarah Bowman has the role of Hermia, who she describes as; “A short, bubbly, down to earth wistful woman who thinks highly of her friends and is in love with Lysander”. She has fun working on the role especially as it is her first play, she works very closely with Ava Dixon who is the Hermia within the Navy cast. The process has been fun, but there has been difficulties as well. Memorizing all the lines and doing that with blocking has been especially tough; a good example would be Act 3 Scene 2 which has her perform a monologue. This was solved with practice, lots of which even took up connectivity and just simply within the Cafeteria.

Another aspect that Sarah enjoyed would be just simply working with people on the production as she gets to work with people with who she hasn’t interacted, and with people with who she has interacted, such as Megan who will play Helen. Funnily enough Megan is shorter than Sarah but within the story Hermia is supposed to be shorter which makes scenes where Helen is making fun of Hermia’s height interesting to say the least. She even took time to help with the backstage and paint trees which has been reported to be fun.

The backstage crew also have been working hard on getting use to the lighting and all the technical aspects and building the props and backgrounds. With everyone working hard together we cannot neglect the student leadership roles which support every aspect of the play and make sure that everything is working smoother in general. With everyone getting ready for its dress rehearsal which is where all the pieces will fall into place. The cast is excited for before the big day, where they can see every bit of their effort.

As the day comes for the very first in-person play, new opportunities have arisen for the new musical coming up in spring of 2022, “Footloose.” If you want to participate here are some links; Roles for Student Leader are here, Roles for Backstage/Stage Crew are here, and finally, Cast Auditions are here. More information will be available through the Green Level theatre club website which is: here. Overall we are in for some great performances from the Theatre department, which they will no doubt deliver on.

Special Thanks to Rebecca Craig and Sarah Bowman for letting me interview them and making the article possible.