What Does (Taylor’s Version) Mean? 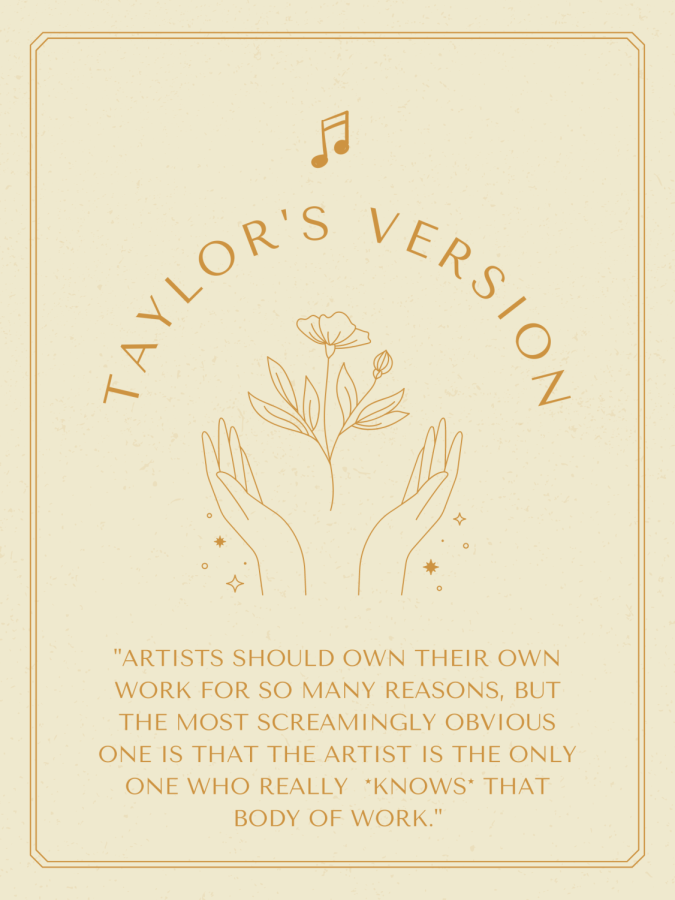 "Taylor's Version" makes the singers music her own. Graphic by S. Sunil.

“I made it very clear that I wanted to be able to buy my music. That opportunity was not given to me, and it was sold to somebody else. And so I just figured, I was the one who made this music first. I can just make it again,” said 11 time grammy winner Taylor Swift on Late Night with Seth Meyers.

On Friday, November 12th Taylor Swift released Red (Taylor’s Version) a rerecording of her original Red album which was released in October 2012. (Check out our review on this album!) A highly anticipated album for her fans but a moment of confusion for others. Why would such a big artist re-record music which is already popular? Why would she record things she released at such a young age when she’s older? The reason for this is money.

In 2005 when Swift first started her career she signed to Big Machine Records. Later in 2018, Swift signed to Universal’s Republic Records. Many music companies own the masters or original recordings of the songs that an artist records under their time with them. And this is exactly what Big Machine Records did. Taylor Swift’s first 6 albums (Taylor Swift, Fearless, Speak Now, Red, 1989, and Reputation) were all owned by Big Machine Records when Taylor switched record labels. And this was fine for her as there would be no loss for her if her music was owned by the company. But the problem arises when the masters were sold by Scooter Braun to the private-equity group Ithaca Holdings for $300 million in 2019.

It may seem that Swift didn’t even try to buy her own masters back but according to Variety.com, on an old tumblr post, she wrote how, “For years I asked, pleaded for a chance to own my work. Instead I was given an opportunity to sign back up to Big Machine Records and ‘earn’ one album back at a time, one for every new one I turned in.” When Swift refused to do so she was not even given a chance to buy her masters or put in some sort of offer.

Swift has stated that she has been bullied by Braun and for this reason publicly spoke out about the sale of her masters to him. According to scotsman.com, “Any money from streams or downloads of Ms Swift’s original recordings will go straight to Mr Braun, which the singer has said she finds unacceptable.” Many of Swift’s fans find this absolutely ridiculous as well. An  anonymous 9th grader from Green Level High School said how “She made the songs, so she deserves the rights and money that come from them. The people who sold and bought the songs had no involvement in making the songs. It’s not fair for them to own it when they didn’t put any work into it.”

So whenever you see an album with Taylor’s Version in parenthesis next to the name, know that Taylor Swift owns it!

Out of the six albums that are unowned by Taylor Swift, 2 have been rerecorded and released so far. Starting with Fearless (Taylor’s Version) which was released in April earlier this year, and Red which was released last week. Slowly, Taylor Swift will regain the rights and ownership to her own music to her own hard work. Obviously she’ll never own the original recordings of these songs but having the Taylor’s version of the songs makes it so she isn’t losing her work completely. To support Taylor Swift listen to the Taylor’s Version, version of your favorite songs or albums!