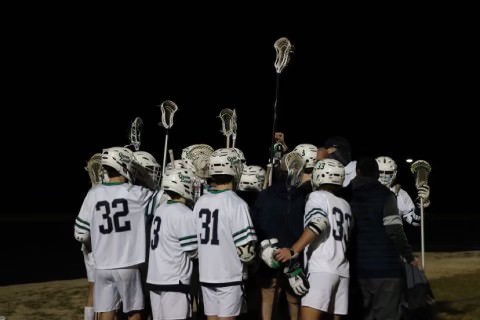 The Men’s Lacrosse team moves to 3-0 with a win against rivals Panther Creek. (E)

The Men’s Lacrosse team moves to 3-0 with a win against rivals Panther Creek.

On Wednesday night, the Gators came out victorious once again. They are now 3-0 and they don’t look like they’re slowing down anytime soon. Green Level stayed strong all night long, and as a result, had a high scoring game against the Panther Creek Catamounts.

The second half went the Gators’ way too with 5 more goals, while Panther Creek only managed to score 3 goals, making the final score 18-4. The Gators played an excellent game, and look to keep building the momentum as the season rolls on. It looks like the team is going to continue to get better and get more wins.

Freshman faceoff specialist Josh “Smitty” Smith played extremely well, winning almost every faceoff. This is Josh’s first year playing lacrosse, and his first week taking faceoffs. He is already great and his future looks very bright. When asked about the game Josh said, “We played well as a team, kept our foot on the gas, and played our best in the later parts of the game.” Josh also had his first goal of the season and of his high school career.

Green Level coach, Kyle Sopko offered, “It’s exciting to come out and be ready to play, that is not an easy thing to do with such a young team. I am proud of how hard this team plays and how they play for their teammates. We are off to a great start but it is important to stay humble and keep getting better each day we are out here.” Coach Sopko has done an outstanding job coaching the team, and the boys on the team all love him.

The Gators will face Jordan next week, as they look to improve their record to 4-0 on the season.