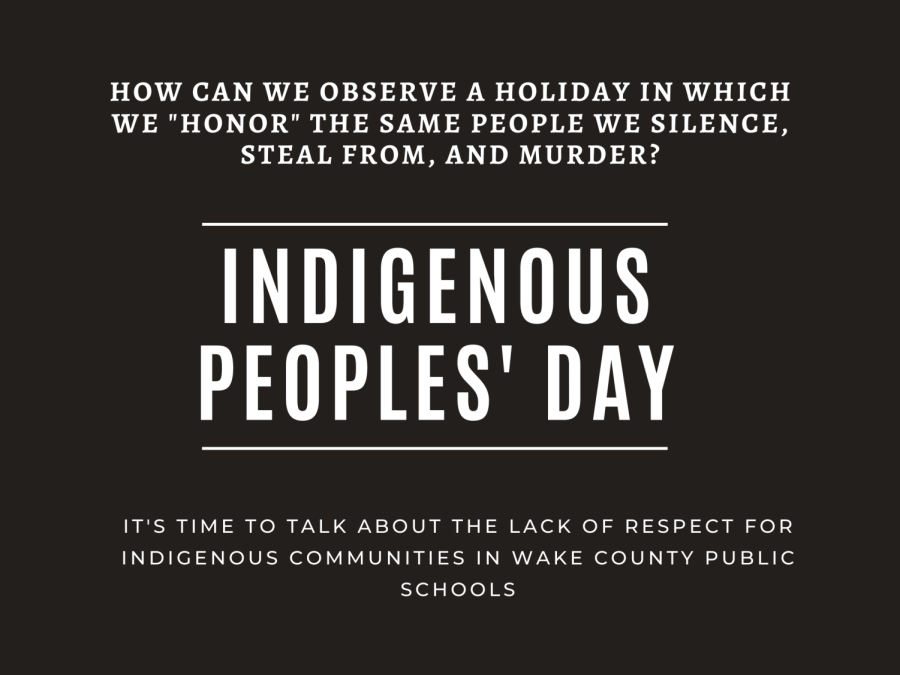 There is no mention of the long lasting effects of European colonization on Indigenous people in school.

In North Carolina, Indigenous Peoples’ Day is October 11th, replacing the federal government holiday of Columbus Day. While Wake County Public School Systems has created a teacher workday for the date, Indigenous culture and community is still never mentioned in school. We do not learn about the significance of the holiday, true “American” history, and the plight Indigenous communities face today.

In recent headlines of the devastating case of Gabby Petito, an influencer who died from homicide during a trip with her fiance, there has been no mention of violence against Indigenous people and women. It shows how the press often dims the stories of marginalized people in comparison to cis-white women. In Wyoming, the state that Petito went missing, Indigenous people have made up 21% of homicides while being only 3% of the population.

We do not learn that more than four out of five Indigenous women reported that they have been the victim of violence and more than half have been victims of sexual violence: that is two to three times more than women of any other race. We do not learn homicide is the third leading cause of death of Native girls and women from 10 to 24 years old, and that data from the Department of Justice shows that murder rates Native women face are more than 10 times the national average. We do not learn that there is a legal loophole continuing this lack of accountability in which “if a non-Native American commits an act of violence against a Native person on tribal lands, it’s up to federal prosecutors to decide whether to pursue the case.”

There is no mention of how COVID-19 has disproportionately harmed Indigenous communities, as their incidence rates have been reported to be 3.5 times higher than White Americans. Or that 1 out of 168 Indigenous children lost a parent or grandparent caregiver which is more than four times the number of white children. We do not learn the terms like blood quantum and how the white government quantifies Native identity. We spend little to no time learning about residential schools like Carlisle which stripped and stole children of their heritage.

How is it that our school system, county, and state get a pass on honoring a community in which they only silence and murder? Since elementary school, we have been misinformed on the “discovery” of the country and the long lasting effects, isn’t it time to change?