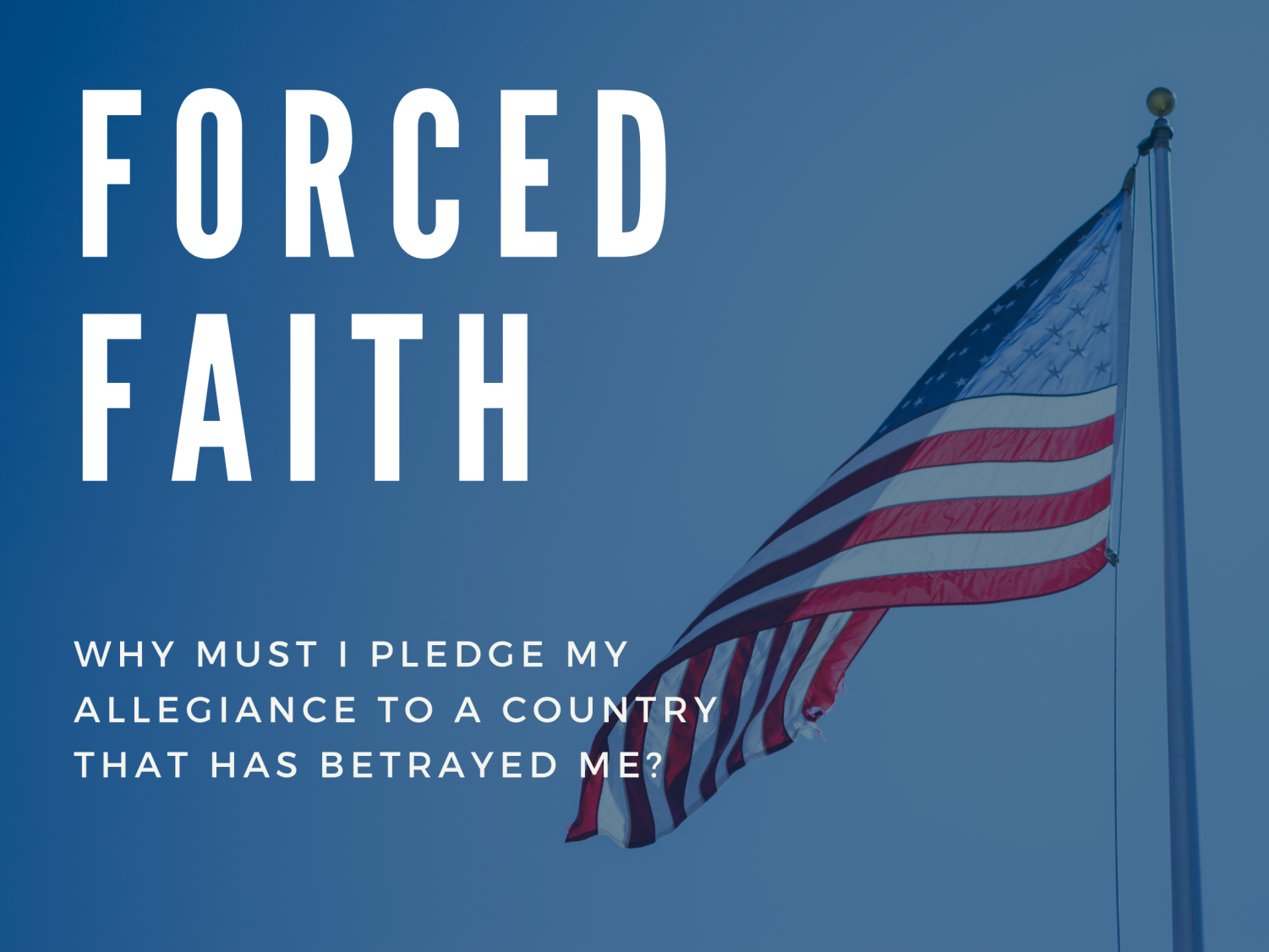 Though students say the pledge everyday, they never learn about its meaning, origins, and the irony of it all. (Graphic made by A. Guo on Canva)

Though students say the pledge everyday, they never learn about its meaning, origins, and the irony of it all.

Graphic made by A. Guo on Canva

Problems with the Pledge

“I pledge allegiance to the flag of the United States of America, and to the Republic for which it stands. One Nation, under God, with liberty and justice for all.”

Every weekday, for the past 13 years of my life, I’ve had to pledge my allegiance to the flag of the United States. As soon as I was five years old, I had memorized a promise I did not understand to recite for the rest of my K-12 career. When I got to middle school, I associated troublemaking with sitting down during the recitation after my math teacher reprimanded classmates of color. Even now, every morning I hear the oath of allegiance being muttered by my peers to the red, white, and blue flag in the front of the class as they stand with their hands over their hearts.

But despite our daily repetition of the pledge, we barely know anything about it: who created it, how it was created, how it was altered.

In fact, the pledge was written in 1892 by Francis Bellamy to define “true Americanism.” At the time, it wasn’t meant to include people of color or immigrants, even those coming from southern and eastern Europe.

Throughout history, the pledge’s racist and xenophobic origins have bled through its use. In a national effort to “Americanize immigrants,” there became an effort of saluting the flag in public schools. Keep in mind, the term Americanization was an argument used by the Ku Klux Klan to keep out immigrants. Then during World War II, it was decided the salute with the right hand extended towards the flag was too close a resemblance to the Nazi salute so the motion was replaced with the hand over the heart.

Furthermore, the fact that the pledge was to be said by students during World War II was also odd: the pledge claimed “liberty and justice for all” while Japanese Americans were imprisoned in internment camps. Afterward, it made students pledge their allegiance to a country that hired Nazi scientists who performed war crimes in Jewish concentration camps. The same country that covered up and ignored the mass torture of Chinese civilians by the Imperial Japanese Unit 731.

In fact, the term “under God” was introduced as an anti-Communist response by Eisenhower. He argued that “under God” set the United States apart from atheist countries at the time like the Soviet Union, messaging favoritism to a non-secular and monotheistic state, while encouraging American nationalism.

Every day we are taught to promise our loyalty to a country that exploits Black bodies, criminalizes poverty, executes children, murders disabled people, expels and abandons migrants, and polices marginalized communities’ bodies. I was conditioned to show faith to a country that has attacked my elders and called me a virus. A country that has an ongoing pattern of failing its own people.

That is not to mention that the flag we are pledging our allegiance to has been used as a symbol for the Ku Klux Klan, which stood for killing civilians during events like the Wounded Knee Massacre and millions of people during the War on Terror, that flies as the National Anthem celebrates the murder of enslaved people.

For what reason is it that we have spent so much time on these false words without ever educating ourselves on the truth of our past? On the terrors of our present? How do we recite liberty for all when we turn a blind eye to injustice? Why are we taught to swear our faith to a country that turns its back on us again and again?