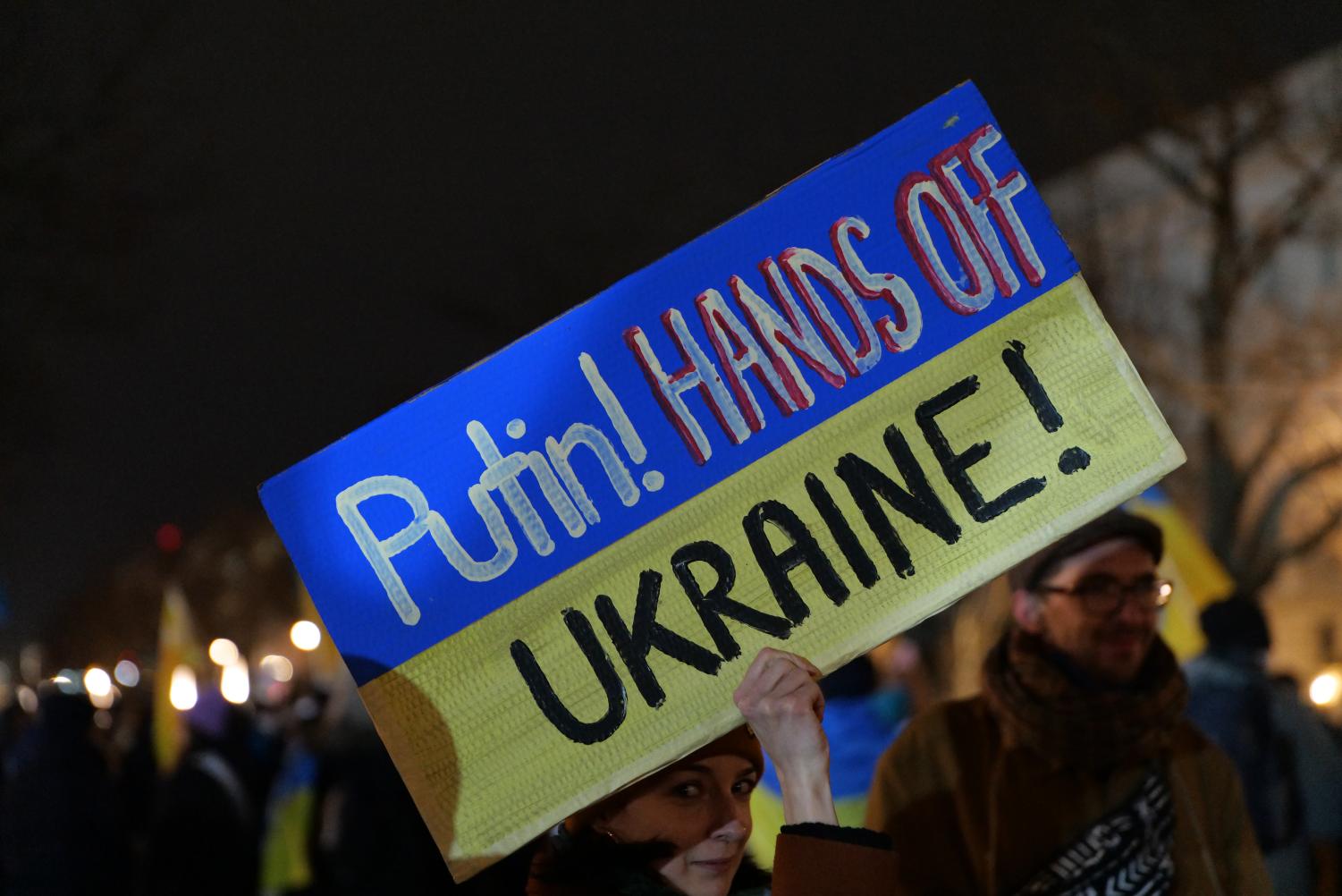 On February 22, Protesters in Berlin, Germany, March in Support of Ukraine and against Putin. (Leonhard Lenz, CC0, via Wikimedia Commons)

On February 22, Protesters in Berlin, Germany, March in Support of Ukraine and against Putin.

Pavlo Panchuk, a Ukrainian exchange student, is enjoying the privilege of studying in America at Green Level high School for the 2021-2022 school year. However, things back at his home are looking catastrophic for him as the Russians brush off their mask of diplomacy and uncover the true identity of the Soviet Union.

Pavlo Panchuk is from a small town in the North-West of Ukraine called Zdolbuniv. His family and friends are spread all over the country, as his dad and almost all of his family friends were called for war from 2014 up to this moment. Pavlo’s cousin serves in the Security Service of Ukraine and was in Donbas a couple of times while his daughter and wife waited for him. Pavlo’s cousin and uncle joined a territory defense group designed to protect neighbors. He expresses his worry for his friends and family, “They all are very scared, now they hide in the bunkers, basements or ran to villages or west of Ukraine.”

He refers to his town as lucky, as nearby regions were attacked, but they avoided the first day of hostilities. Pavlo explains that his town is one he believed would be of value to the Russian invaders, “Near town, we have a huge airbase and strategically important railway station, which was very attractive for Germans during WW2.”

While his family faces dangers in Ukraine, Pavlo is in the United States living with a host family that he refers to as his “American family.” He says that the most important thing they do for him is providing “love, support, and understanding.” Pavlo has a visa, allowing him to live in the country up until his schooling in the US comes to an end, meaning he will have to go back home to Ukraine when his visa expires. He mentions, “placement organizations send us dates when we must leave; these dates are the dates when our visa inspires. My date is May 11. What they are going to do I don’t know. They won’t put us in danger, that’s for sure.”

Yesterday, February 24, Pavlo stayed home from school, given the situation back home. He was up the whole night tracking the news and talking to his family, saying he only got two hours of sleep as he tried his best to make sure that his family and friends were safe. “It was a hard day, last time I felt these feelings was in April 2014, when Russia attacked Donbas. But back then I was too young to realize what is actually going on. And today the nightmare becomes true.”

Pavlo brings up the fact that the people of Ukraine are “strong and powerful” and “prepared and organized.” They have solid and valuable precautions to take in each possible situation. He says that the drills were helpful; the main point behind them was to locate the closest shelter, bunker, basement, etc. “Today, they bought all of the products that are needed for the first three days of the war. Police and territory defense groups check on society and help everyone prepare for the war…Ukraine protects its cities, airports, and borders.” he said. He says that all of Ukraine is prepared and strong in this time of crisis and that because of the events in 2014, everyone is unfortunately well-acquainted when dealing with war.

Panchuk mentions the most significant worry of his people; “the biggest concern of Ukrainians is losing independence- to lose the right to be Ukrainian with our own culture, language, and traditions. We are scared for our lives, relatives, future, for Ukraine. We are scared to lose our homes. I am scared to lose connection with my family, lose my family, and hear the news that my town has been bombed. When I was leaving I didn’t think that it was the last time that I saw my parents – and I am sure that it will not be  my last time. We are not scared of Putin or Russians; through our history they have been bugging us. We were scared to lose our families.”

The state of war worries Pavlo, but when it comes to his confidence in his country and his people’s hatred for Russia, he strongly believes that the Ukrainian army will prevail against the Russians. “Personally, I didn’t like my president because of his background and the decisions that he made in a peaceful time. But now he is the leader of the country, he reports how things are going every hour, and he has conversations with leaders of NATO countries. He is a strong man who can win the war. Ukrainians are prepared and ensured that the Ukrainian army will win.” Referring to Putin as a “weak old man,” Pavlo further demonstrates his undying confidence in his people and his country, “Believe me, there is nothing angrier or more powerful that Ukrainians who have a fight with a Russian…we have support, hope, and God on our side.”

Pavlo says that the sanctions are influencing Russia and the very real scenario of Russia morphing back into the USSR  is happening.