Many heroic tales and truths are spreading across the globe, and support for Ukraine is being shown more with every minute. These heroes may not wear capes, but they do in the world’s eyes.

Thirteen soldiers were reported killed defending a tiny island after refusing a Russian ship that ordered them to surrender.

Snake Island is a roughly 16-hectare (40-acre) rocky island owned by Ukraine that lies about 300km (186 miles) west of Crimea.

Ukraine says 137 of its civilians and military personnel were killed during Russia’s invasion on Thursday.

The guards defending Zmiinyi Island in the Black Sea were told to “lay down your weapons” or “be bombed.”

“This is a Russian warship…I propose you lay down your weapons and surrender to avoid bloodshed and unnecessary victims. Otherwise you will be bombed”

The Ukrainian soldiers can then be heard speaking amongst themselves, agreeing “this is it,” before their final “go f— yourself”.

According to Ukrainian officials, those were the last words heard from the island before Russia began strikes, and Kyiv lost contact with the island.

“On our Zmiinyi Island, defending it to the last, all the border guards died heroically,” he said.

However, the official Russian account of the incident differs dramatically. Moscow said the 82 Ukrainian soldiers on the island surrendered voluntarily and did not mention carrying out strikes or inflicting casualties.

Now, it is believed that the soldiers are alive. However, Russia and Ukraine continued to offer competing statements about how the soldiers came to be in Russian custody. Russia says they surrendered, while Ukraine maintains they were taken captive. Nevertheless, they showed immense bravery and demonstrated a spirit that brings the support and morale that Ukraine has no lack.

Ukraine said the Snake Island infrastructure was destroyed in the Russian attack. Furthermore, the audio recording of the incident indicates that the soldiers were defiant, all of which calls into question whether the surrender was voluntary. General Staff of the Armed Force

Vitaly Skakun Volodymyrovych, a Ukrainian marine battalion engineer, became one of the war’s early heroes after sacrificing himself to prevent Russian soldiers from advancing.

He had volunteered to lay explosives on the Henichesk bridge, which linked Russian-occupied Crimea to mainland Ukraine, to prevent invading tanks from passing.

However, when Volodymyrovych realized he wouldn’t have enough time to go to safety, he opted to explode them, according to the Ukrainian military. 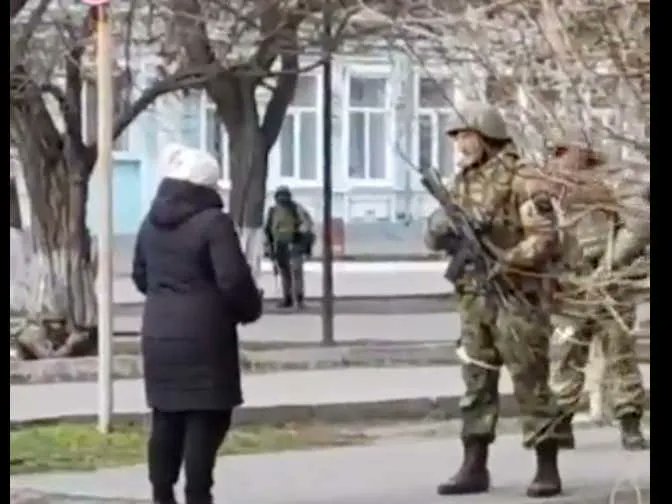 Amazingly enough, one lady from Ukraine came at a group of Russian soldiers, armed with nothing but a bag of sunflower seeds and the fire of an Eastern European woman.

“You’re occupants. You’re facists. What the —- are you doing on our land with all these guns?

Take these seeds and put them in your pocket, so at least sunflowers will grow when you all die here.”

Footage shows a brave Ukrainian man stopping a Russian tank with his bare hands in the streets of northern Ukraine’s Bakhmach. The video was shared by the country’s Ministry of Foreign Affairs.

The video is said to have been filmed in Bakhmach, northeast of Kyiv, on the third day of the Russian invasion.

The footage shows an unidentified man placing his hands against the tank to obstruct the path of the Russian military. Then, he applied pressure against the Russian tank, pushing it backward with his body weight until it slowed to a halt.

The Ghost of Kyiv

The Ghost of Kyiv is a legend born through the media. Some say the stories of this fighter pilot are true, while others believe it’s little more than a story to keep hopes up during bleak times.

The Ukrainian military has fought against the Russian invasion, and one fighter pilot has become a hero through social media. Known as the “Ghost of Kyiv,” this exceptional fighter pilot is said to have single-handedly brought down six Russian planes.

On February 24, the first day of the conflict with Russia, a story emerged on Ukraine’s official Twitter channel about an unnamed Ukrainian pilot who shot down six Russian aircraft within the first 30 hours of the war. The Twitter channel reported four more were shot down two days later.

The pilot, deemed a hero, was given the nickname “The Ghost of Kyiv” because of his alleged ability to hit the targets then disappear quickly back into the air.

The Twitter account mentioned, “Ukraine probably got its first ace since World War II. This is the anonymous pilot of the MiG-29, nicknamed the Ghost of Kyiv.

A pilot must shoot down five or more aircraft to become an ace. French military propaganda coined the term during World War I.

Stories vary, and there is no evidence to prove that this ghost is real or just a tale spreading through media, but that’s okay. This story has brought people together and even led to lots of memes. Whether the Ghost of Kyiv is real or not, alive or dead, he is a person bringing people all over the globe together in this time of Ukrainian crisis.